The passing week’s bar demonstrated a typical shake out. The market started with a false thrust above the Daily pinbar I’ve suggested in the last review as an aggressive buying position, then extended the range down taking out stops at the last lows: 6663.72 and 6616.51, then reversed, closing the week much more powerful – as a Weekly OKR, which happens to be also a Weekly bullish pinbar.

This whole price action took place right on the most important line mentioned in the previous reviews, as the Monthly LLBH at 6693.8 from which the last attempt to reach a new all time High has started (and failed eventually) going higher above the 6950 level (6950 was the level that served as an all time High for 15 years).

In the Weekly chart you can see that after closing two weeks above the mentioned resistance line, the last Weekly bar served as another signature that the market is bullish by puncturing the resistance line from above proving it as a support, closing on the high, very strong. The next High levels on the way up are not tough resistance levels for a Weekly swing in this case, and should serve as a support after being taken out: 6813.41 and 6873.43.

Yet, the bullish signal is only by taking out the Weekly High. This bullish setup should most likely reach the 6986 level (approximately this pinbar’s amplitude), slightly higher than the important 6950 level mentioned above. Stops below the Weekly Low.

There are also very good chances to make a new all time High, but it may take place after at least a Monthly correction down. 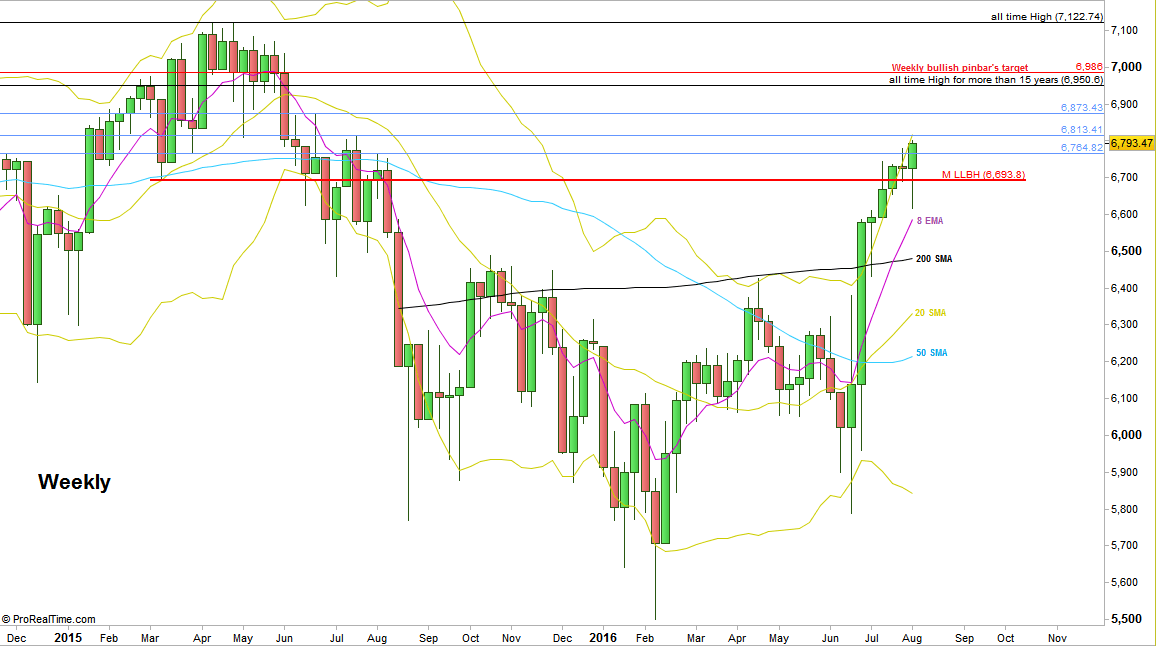 FTSE Futures, Weekly chart (at the courtesy of prorealtime.com)