Like most other stock indexes, the FTSE100 had also a relative small range consolidation bar, made of a clear correction and a reversal on the Daily timeframe.

The market looks like it is heading to take out the High of August 2015 at 6764.82, but a very strong resistance expecting it at the 6694 area, the Monthly last Low before All time High (the Low of March 2015). This resistance can dump the price back into the previous Weekly mid range, at the 6200 level area.

It is interesting to see how the market deals with it, as this was the last major area where buyers came and pushed the market into the All time High, above 15 Years range, a break up that has failed so far.

As described in the last review, a clear bullish signal can be seen on the Monthly timeframe, as June ended with a big Bullish pinbar which also was an OKR (Outside Key Reversal). Since we already got a thrust above its High, Such pattern should target the price for the same amplitude, i.e. above the All time High. But the market is still in a longer term bearish setup, and in order to negate this setup, the market needs first to take out the High of July 2015 at 6813.4.

Back into the short term, a good bullish setup can emerge if the market corrects at least one day without taking out the Weekly Low. Later, a thrust up above the Daily swing High, currently the High of Friday at 6605.83 can give a target exactly at the above mentioned resistance, near 6694.

On the other hand, taking out the Weekly Low at 6432.47 is an important sign of weakness, and the price should decline easily into the next major support at the 6380 area. 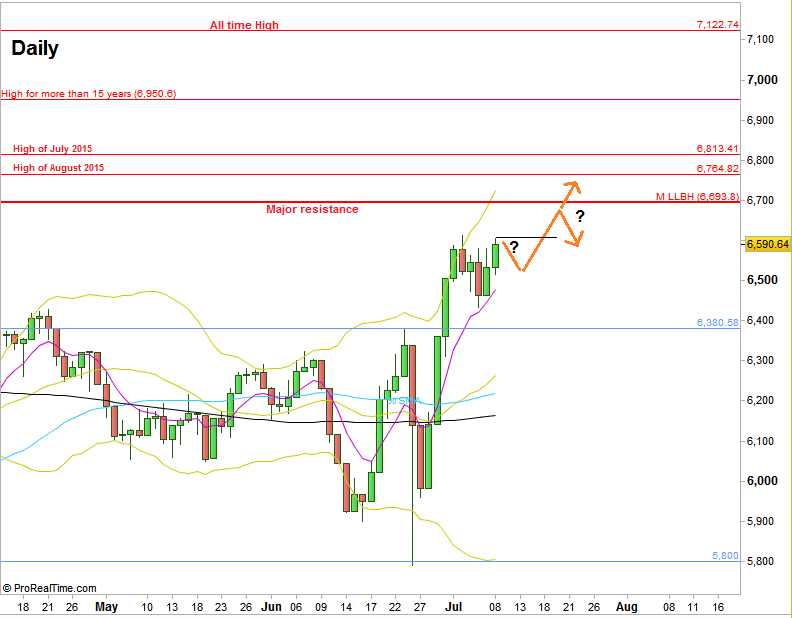 FTSE Futures – Daily chart (at the courtesy of prorealtime.com)