The stubborn sideways action continues, but the passing week revealed a considerable sign of weakness, by making an upthrust (false thrust) above the previous two week range, finally taking out their Low at 6109.58 as well.

This kind of price action, followed by a thrust down in the coming week is bearish, but the real test and signal for a midterm bearish behavior is to watch the price taking out the Monthly Low at 6050.21.

In the last review I mentioned that going up above 6290.07 is bullish, but best if happens not before Thursday. Well, eventually the market made a misleading move by taking out that high right at the beginning of the week rather than towards the end of it, and failed to continue the move. Pay attention to the first sign of weakness made by the LL of Wednesday’s bar, eventually closing at its high – a clear recovery attempt to continue higher. Taking out the Low of Wednesday revealed that the recovery attempt has finally failed, hence yielding as a result a fast, sharp and very decisive reaction down by the big bearish bars of Thursday and Friday.

In both cases the price can retrace deeply back into the range before reaching the target. So in order to avoid the huge Stop Loss correct level, still taking advantage of the above, shorter timeframe signals should be followed, trying to maximize only portions of the position towards those targets.

As long as the price is in between the above levels, it is better not to count on inner range signals to lead us to a target outside these levels, and assume that the current sideway action is still underway. I won’t even be surprised to see the coming Weekly bar as an inner bar of last Friday (!) 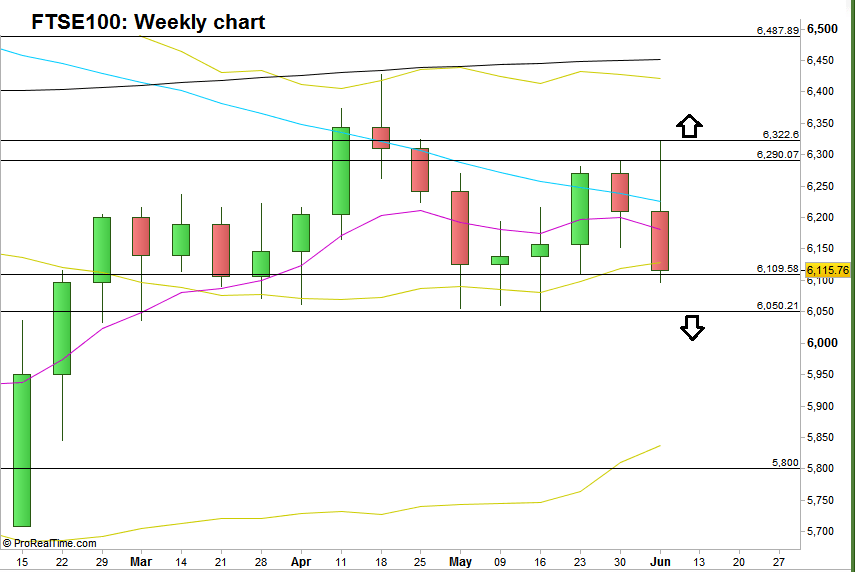 FTSE100: Weekly chart with the levels mentioned (at the courtesy of prorealtime.com)