The FTSE 100 has opened down 4.1 points at 6,840.4 as market heavyweight Vodafone admitted its core earnings would fall in 2015 due to the amount of investment needed in the business.

The mobile giant fell 3 per cent or 7.25p to 209.90p, extending yesterday’s losses after AT&T’s move to buy satellite television provider DirecTV dashed hopes of a bid from that quarter. Read more here.

Traders are awaiting the latest monthly inflation figures to gain clues on when the Bank of England might start raising interest rates. 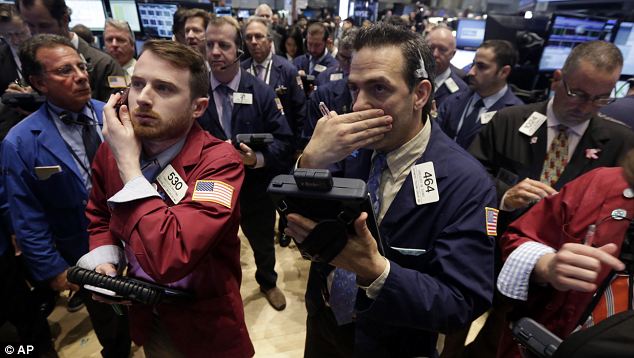 Michael Hewson of CMC Markets said: ‘The focus today lies on the UK economy after Bank of England governor Mark Carney’s dovish comments last week in the aftermath of the most recent quarterly inflation report.

‘The decision to leave the UK economy’s growth and inflation forecasts unchanged for 2014 feeds into an expectation that rates won’t rise before next May’s general election.

‘Today’s latest inflation data for April could well be expected to reinforce that narrative, though a sharp rise in the annual CPI rate could prompt a sharp move higher in the pound if, as expected, the annual rate rebounds from the multi-year lows of 1.6 per cent we saw in March.

If, on the other hand, the CPI number comes in weak then we could see a sell-off in the pound back towards last week’s lows, as traders throw in the towel on a possible test of $ 1.70.

‘Consumer prices are expected to rise 0.3 per cent month on month and 1.8 per cent on an annualised basis, putting them back above last week’s disappointing average earnings numbers.’

VODAFONE GROUP: The world’s second-largest mobile operator said its core earnings would fall in 2015 due to the investment needed in the business as it reported 2014 results in line with forecasts, helped by an improvement in underlying trading in the fourth quarter.

MARKS AND SPENCER: The retailer made a profit before tax and one-off items of £623million, compared with a consensus of £615million. This represented a third straight decline in annual profit, with three years of heavy investment yet to revive the firm’s underperforming non-food business.

BP: A US appeals court will not revisit a decision to reject the oil major’s bid to block businesses from recovering money over the 2010 Gulf of Mexico oil spill, even if those businesses could not trace their economic losses to the disaster.

LONDON STOCK EXCHANGE GROUP: The LSE said it had entered into exclusive discussions with The Northwestern Mutual Life Insurance Company over a potential acquisition of asset management group Russell Investments.

ROYAL BANK OF SCOTLAND: The bank has handed its new finance director, Ewen Stevenson, almost £2million in shares on his first day in the job, The Guardian wrote.