12.45: Strength in housebuilders provided further momentum for the London stock market today as the FTSE 100 Index briefly touched its highest level in 14 years.

Some of that rally faded as the session wore on, but at lunchtime the FTSE 100 index remained in positive territory – up 6.6 points at 6,858.4. 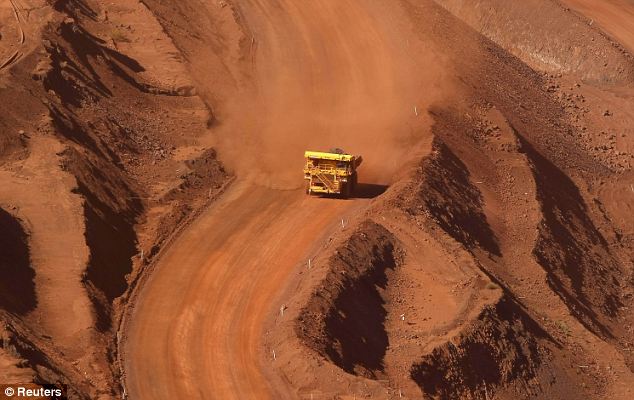 Strength continues: Heavyweight mining stocks continued to provide a prop for the Footsie on China hopes and after a recent broker upgrade.

The latest milestone came as investors celebrated a new record high for the Dow Jones Industrial Average on Monday night and as riskier stocks such as miners returned to favour helped by hopes for an improving economy for top metals consumer China.

The latest improvement was driven by housebuilders after FTSE 250 firm Taylor Wimpey said it was confident it will have met or exceeded its main financial targets by the end of next year.

Aided by Government schemes such as Help to Buy, the company also announced an enhanced set of financial targets for 2015 and 2017.

Mining stocks also continued their strong week, having been boosted by a broker upgrade on Monday, as BHP Billiton improved 28.0p to 1,976.0p and commodities trader Glencore Xstrata added 4.9p to 334.5p.

In corporate updates, shares in low-cost airline easyJet lost some of their recent strength in the wake of half-year results.

easyJet shares were 72.5p lower at 1,657.5p at the top of the fallers board, even though the airline produced a smaller-than-expected winter loss of £53million, down from £61million a year earlier.

Richard Hunter, head of equities at Hargreaves Lansdown Stockbrokers said: ‘The initial share price reaction shows that the weight of expectation for easyJet is, unsurprisingly, increasing.

‘Having added 50 per cent over the last year, as compared to a 3 per cent hike for the wider FTSE100, the shares may be subject to some shorter term profit taking, although the market consensus of the shares as a buy remains firmly intact.’

There was a similar decline for TUI Travel after the Thomson and First Choice tour operator announced a slightly lower half-year operating loss of £315million.

TUI Travel’s chief executive Peter Long said he was pleased with summer trading, given strong comparatives, and added that the company remains on track to deliver 7 per cent to 10 per cent growth in underlying operating profits during the year.

TUI Travel shares have enjoyed a strong run in recent weeks but were down 2 per cent or 11.2p to 430.5p in the wake of today’s update. Rival Thomas Cook was 0.9p lower at 181.0p ahead of its own update due later in the week.

Vodafone was also a big blue chip faller, losing 3.7p at 220.7p as hopes of a takeover bid for by AT&T were dashed after it the US telecoms giant revealed it is in advanced talks over a $ 50billion move for US satellite TV operator DirecTV.

Speculation about an AT&T-Vodafone tie-up built-up in January, forcing the US firm to rule out a bid for six months under ;put-up-or-shut-up’ takeover rules.

In other takeover chatter, the London Stock Exchange saw its shares fall 34.0p to 1,821.0p after it confirmed it was in talks with US life insurer Northwestern Mutual about a possible purchase of its asset management and indices group Russell Investments.

Investors were spooked as LSE said any deal would be part funded by an equity issue.

But on the upside with takeover situations, drugmaker AstraZeneca added 45.0p at 4,655.0p on talk US predator Pfizer could increase its indicated 5,300p a share offer for the firm  with a better cash element.

MPs are today quizzing both of the drug companies’ bosses on the proposed deal.

Also on the rise was industrial group Melrose, which added 5.2p to 292.4p after it said orders had risen 3 per cent so far this year, although it warned that the pound’s continuing strength would hit revenues.

The update came as Investec Securities upgraded its rating for Melrose to buy from add.

09.50: The Footsie made further inroads towards record levels as the morning session progressed as investors cheered another strong session by US stock markets fuelled by solid corporate earnings, improving economic news, and a dash of M&A activity.

Building gains: Housebuilders found support today after Taylor Wimpey said it was confident it will have met or exceeded its main financial targets by the end of 2015.

Markus Huber, senior sales trader/senior analyst at Peregrine & Black said: ‘No doubt sentiment for stocks has turned positive for now, however it needs to be seen if stocks can hold on to their gains.

‘It will be interesting to see if the Dow and S&P500 can post another new all-time high today and also if the German DAX might be following in their footsteps not being off to far from marking a new high itself either.

‘While markets look firm for now, there is still plenty of potential to derail the current rally, especially should Russia decide to accept the offer of two Eastern Ukrainian provinces which yesterday after the referendums held on Sunday applied to join the Russian federation.’

The latest rally in London has been fuelled by strength in mining stocks, which were buoyed yesterday by an upgrade in strategy rating from JPMorgan Cazenove, with those gains continuing today. BHP Billiton added another 35p to 1,983p and Anglo American gained 23.5p at 1,665.0p..

The improvement came after FTSE 250 rival Taylor Wimpey said it was confident it will have met or exceeded its main financial targets by the end of 2015. Shares in Taylor Wimpey jumped 6p higher to 112.3p.

Back in the top flight, pub group Enterprise Inns was the biggest gainer, up 4.5p to 149.5p after it said improving trade boosted by strong demand in the south of England and a support programme for its publicans left it confident of achieving full year underlying net income growth.

But on the downside, shares in low-cost airline easyJet lost some of their recent strength in the wake of half year results.

EasyJet shares fell 66.5p to 1,663.5p, even though the airline produced a smaller-than-expected winter loss of £53 million, down from a £61million loss a year earlier.

TUI Travel, Europe’s biggest tour operator by revenues, was also lower in spite of solid results.  Its shares shed 6.2p at 435.4p after reporting a better than expected first half loss despite Easter falling outside the period this year, and saying it was on track to meet its profit growth targets.

08.20: The Footsie pushed higher in opening deals, extending yesterday’s gains after US stocks reached new record levels eclipsing any worries about the tense situation in Ukraine. 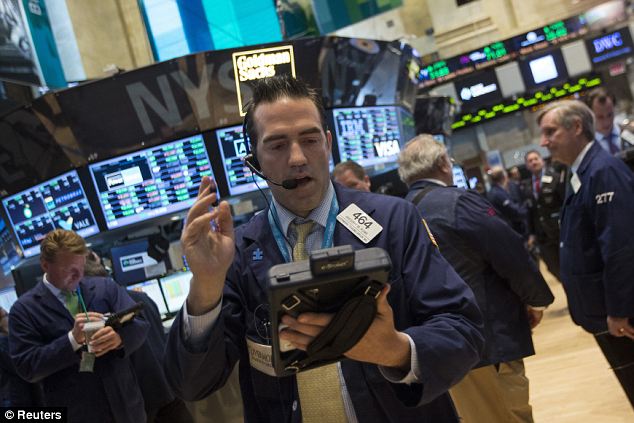 High five: Record closes by US stock indices yesterday spurred rallies in Asia and early gains by the Footsie today.

Asian markets were also higher today although gains were capped after China industrial production fell unexpectedly last month. A report from the National Bureau of Statistics showed production fell to 8.7 per cent from 8.8 per cent in the preceding month.

Equity markets have so far brushed off a weekend referendum in Ukraine, where pro-Moscow rebel organizers said nearly 90 per cent had voted in favour of self-rule, possibly inflaming the conflict, although underlying caution over the situation in Ukraine remains a factor.

Traders took heart from a further sign of the strengthening UK economy, with the latest British Retail Consortium report released overnight showing that high street sales got a boost in April as rising house prices encouraged shoppers to buy new furniture, flooring and other home decor over the Easter holiday weekend.

No other important UK economic data will be released today although US retail sales data, due at 1.30 pm, will be closely watched by traders for signs of improvements across the Atlantic.

James Hughes, chief market analyst at Alpari (UK) said: ‘To me these numbers are invaluable as they don’t only show sales figures in the retail sector but give us the best type of sentiment number as they tell us just how the general public are feeling when they put their hand in their pocket.

‘What people are buying and what they are not shows us just how far down the line of economic recovery an economy is as it shows how the electorate feel about actually spending money. You need two things for a thriving economy, spending and lending.’

ASTRAZENECA – US drugmaker Pfizer kept up the pressure on bid target AstraZeneca today, saying its offer represented compelling value for a company which would otherwise face challenges as a standalone firm. AstraZeneca has rejected a $ 106billion bid from Pfizer but the US group is widely expected to return with a higher offer later this week.

EASYJET – The low-cost airline reported a forecast-beating narrower seasonal first half loss as it held down costs and said it was on track to continue to deliver sustainable growth and returns for shareholders.

TUI TRAVEL – Europe’s biggest tour operator by revenues reported a better than expected first half loss despite Easter falling outside the period this year, and said it was on track to meet its profit growth targets.

ROYAL BANK OF SCOTLAND – RBS’s US unit, Citizens Financial has filed with US regulators for an initial public offering of common stock that would raise about $ 100million.

LONDON STOCK EXCHANGE – The UK bourse operator said it was evaluating the merits of a possible deal with Frank Russell.

REXAM – The world’s second largest beverage can maker in terms of revenue is to return £450million of its cash to shareholders.

NATIONAL EXPRESS – The transport group said it was on track to deliver earnings expectations.

TAYLOR WIMPEY – The housebuilder said its sales rates were at the upper end of expectations.

BARCLAYS – The bank said it has appointed John Chang and Vikesh Kotecha to lead its equities sales and trading business in Asia Pacific.