The FTSE 100 has opened down 28.7 points at 6,576.6, mirroring losses on Wall Street where technology stocks such as Facebook and new arrival King Digital Entertainment took a hit

Facebook tumbled 6.9 per cent after the social networking company said it would acquire two-year-old Oculus VR, a maker of virtual-reality glasses for gaming, for $ 2billion.

A 15.6 per cent plunge in the shares of King Digital Entertainment, the maker of the popular ‘Candy Crush Saga’ game, also dampened investor enthusiasm for tech floats. 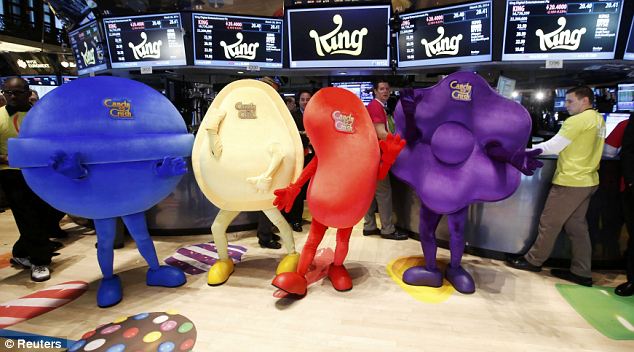 King’s stock sank in its trading debut after the initial public offering valued the company at about $ 6 billion. Read more here.

‘Concerns that the tech sector has pumped itself up into a bubble again were highlighted by the disastrous debut of King Digital,’ said Capital Spreads trader Jonathan Sudaria.

‘Expect this one trick pony to suffer the same fate as the much hyped sector forbearer Zynga, which fell 75 per cent after its IPO. Also, be on the look out for the next big thing “squares and triangles”, my mobile version of noughts and crosses coming to a market near you for a snip at $ 1billion.

‘Adding to overnight woes, warnings by the US President Barack Obama that the conflict in Ukraine might escalate pushed the equities firmly down yesterday.’

Simmering tensions between the West and Russia are expected to weigh on investor sentiment today too. The US and the European Union agreed yesterday to work together to prepare potential tougher economic sanctions in response to Russia’s intervention in Ukraine, including on the energy sector.

UK retail sales numbers for February are due out later and expected to show an improvement from January’s sharp 1.5 per cent decline.

ROYAL BANK OF SCOTLAND, HSBC: Among banks blocked by the US Federal Reserve in their plans for higher dividends or share buybacks were the US units of HSBC and RBS, due to weaknesses in their capital planning processes.

BP: Between nine and 18 barrels (378-756 gallons) of oil spilled into Lake Michigan from BP’s Whiting refinery in Indiana after a malfunction on Monday, the US Coast Guard confirmed.

GLAXOSMITHKLINE: GlaxoSmithKline and Merck and Co Inc are not reimbursing drug co-payments for patients who purchase their health insurance through state and federal exchanges set up under the Obamacare programme.

Separately, Glaxo is linking with two top bioscience centres on an open-access research project to tap into ‘big data’ generated by gene research, in a move highlighting how drug companies are learning to share.

COMPASS GROUP: The catering firm said it sees first-half revenue growth of about 4 per cent.