12.15: The FTSE 100 was trading down 3.5 points at 6,601.8 shortly before the Chancellor was due to get to his feet in the House of Commons to deliver the annual Budget speech.

David Madden, market analyst at IG, said: ‘Today is a big day for the UK and the US.

‘George Osborne will reveal the Budget for 2014 and the Federal Reserve will make its latest announcement, the latter having more of an impact to the markets. 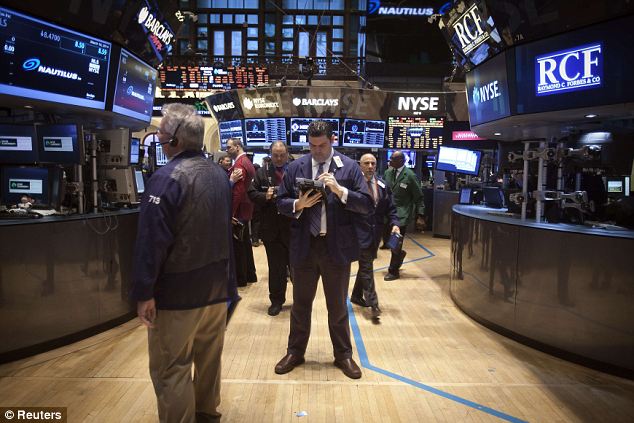 Gains lost: Global markets retreated following a rally on Tuesday as traders eyed news from the Fed due late today

‘The consensus is for a taper of $ 10billion [monthly cut to the $ 65billion-a-month stimulus programme] from the Fed, and we are back to the days of good news being good news.

‘Traders have accepted that the US economy no longer needs as much support, and only a taper of $ 15billion would rock the boat.’

Kathleen Brooks, research director at Forex.com, said: ‘Overall, the markets are fairly quiet as we lead up to the UK Budget at 12.30pm and Janet Yellen’s first press conference as Fed chairwoman at 18.30pm [London time].

‘The market seems to be expecting a dovish Yellen, and US stocks managed to rally on Tuesday as the financial community put the Ukraine crisis on the back burner.

‘For now, the Russia/Ukraine stand-off in Crimea seems to be considered a political, not an economic crisis after [Russian president Vladimir] Putin said that Russian gas will continue to flow through Ukraine.

‘The bigger risk to the markets today is that Yellen is less dovish than expected, reflecting the range of views at the Fed, including hawkish ones from some new members, which could stir up fears that the Fed may quicken the pace of tapering if economic growth picks up next quarter.

‘Watch out for any sign of discord at the Fed around the structural level of unemployment. Some expect this to be larger than expected, which could mean that the Fed has less work to do to try and promote job growth, which could lead to a faster pace of rate normalisation than the market currently expects (the first rate hike is not scheduled until Autumn 2015).

‘While we think Yellen is unlikely to dive into this debate today, if she does then we could see a sharp relief rally in the dollar, and stocks could come under pressure.’

‘Markets have been relatively quiet on the opening bell, probably anticipating the main moves to come on the back of this evening’s US release and content to at least wait for the US open to predict the day’s main move.

‘Another $ 10billion cut to stimulus looks almost nailed on according to estimates, but as usual it will be the accompanying minutes that investors will concentrate on, with any clues as to the health of the US recovery to be much appreciated by a market that has looked more than a little confused over the last couple of weeks.

‘As far as Ukraine is concerned, the market seems to be content that watered down US sanctions coupled with yesterday’s Putin statement is enough to suggest any pending catastrophe can be shelved in the short term.

‘But what Putin says and does doesn’t always tally up, and anyone invested in this market will still have one eye on events in Crimea until a long-term solution is acknowledged by both sides.’

The Footsie slipped back into the red today after yesterday’s rally as attention turned to the latest US Federal Reserve policy decision amid expectations for further tapering of its money-printing drive, and the UK Budget.

Global markets pulled back in cautious trading ahead of the Fed’s decision, with the FTSE 100 index down 10.6 points to 6,595.0 as the morning session progressed, losing some of yesterday’s gains made after a speech by Russian president Vladimir Putin fueled hopes of easing tensions over Ukraine following the annexation of the Crimea region by Russia.

Domestic matters will be to the fore at lunchtime when Chancellor George Osborne delivers his penultimate Budget speech before next year’s UK General Election, although few giveaways are expected as the government continues on its austerity drive to reduce the mammoth national deficit.

Ahead of the Budget, official data today showed that Britain’s jobless rate was stable in the three months to January, but the number of people claiming unemployment benefits fell more than expected and earnings showed signs of picking up.

The jobless rate was unchanged at 7.2 per cent, having edged up to that level in the three months to December – its first increase since February 2013.

Last month, the Bank of England revised its forward guidance policy, which linked interest rate  decisions to the unemployment rate, after the rate fell surprisingly quickly towards the 7 per cent threshold it had set as a level for considering interest rate hikes.

The market’s main focus, however, was on the Fed. The US central bank is predicted to trim its monthly bond buying programme by another $ 10billion after the end of its two-day policy meeting later today – the first since Janet Yellen replaced Ben Bernanke as governor.

In a quiet session for corporate news, engineer Smiths Group led the fallers after posting a  per cent drop in first half underlying pre-tax profits to 215million as strength in commercial markets was offset by ongoing challenges in the healthcare and defence markets.

The group also announced plans to ramp up its Fuel for Growth investment programme and signalled improvements in underlying trading in the second half. But Smiths Group shares fell 77p to 1274p, a 6 per cent decline.

On the upside, upgrades from broker UBS helped engine giant Rolls-Royce and housebuilder Persimmon make gains in the top tier, rising by 15.5p to 1,075.8p and 18p to 1,385p respectively.

08.30: The FTSE 100 has opened flat as traders wait for the US Federal Reserve to deliver a key policy update and Chancellor George Osborne to announce his annual Budget .

The blue chip index started down 1.1 points at 6,604.2, and few big bets are likely to be placed ahead of these two big events.

Osborne will announce an election-oriented Budget at 12.30pm which is likely to offer some tax relief to voters but stick closely to his tough decade-long plan to fix the public finances. 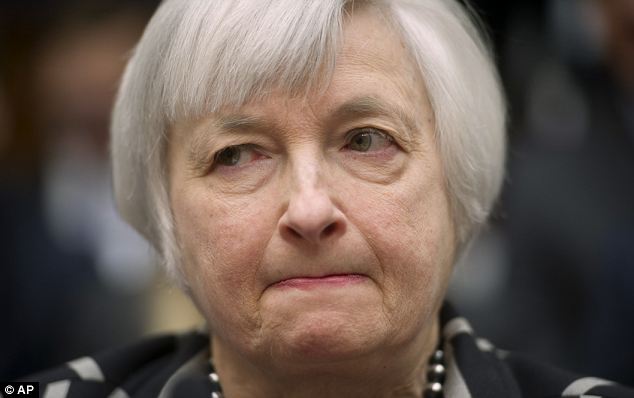 The US Fed is set to further trim its bond-buying stimulus programme and could rewrite its guidance on when it might eventually raise interest rates.

Some expect new Fed boss Janet Yellen, who took over from Ben Bernanke at the end of January, to scrap a numerical target on unemployment and adopt a more flexible stance.

The Fed’s vast stimulus programme has generated plentiful cheap money that boosted stock markets all over the world in recent years.

Its gradual withdrawal, which began last December, has prompted investors to pull money out of emerging markets and caused price volatility across many other asset classes.

The FTSE 100 closed up 36.93 points at 6,605.28 yesterday, marking only the second time in the last eight sessions that it has ended in positive territory.

The modest rally followed a speech by Russian president Vladimir Putin which some traders interpreted as being conciliatory in tone regarding Ukraine.

The prospect of damaging retaliatory sanctions between the West and Russia over Putin’s annexation of Ukraine’s Crimea peninsula has kept markets on edge for several weeks.

Stocks trading without the attraction of their latest dividend – Anglo American, British Land and InterContinental Hotels – will knock up to 2.44 points off the FTSE 100 today.