13.05: The Footsie had recouped all of yesterday’s sharp falls by lunchtime as European markets recovered their poise today as investors welcomed an easing in tensions in Ukraine.

The FTSE 100 index was up 1.5 per cent, or 104.5 points to 6812.4, having slumped by the same amount yesterday in the wake of Russia’s military intervention in Ukraine.

Traders drew encouragement from Vladimir Putin’s decision today to order troops involved in military exercises in western Russia back to their bases. 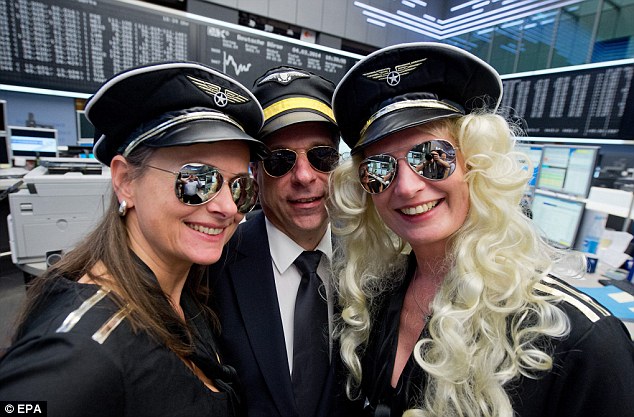 But with Russian forces still occupying much of Crimea and the threat of sanctions from western Europe still a possibility, analysts said confidence in global stock markets remained fragile.

IG market analyst David Madden said: ‘The prospect of war is dwindling as Russian troops have been recalled to their bases – but we are not out of the woods yet. The drop in equity markets yesterday, and correction back today, highlights how volatile an issue this is.’

Markets in Paris and Frankfurt were on the frontline of Monday’s sell-off but improved by more than 2 per cent today.

Commodities such as gold and wheat, which were sharply higher yesterday, gave back some of their gains. Oil prices were 1 per cent lower at $ 103.4 a barrel, following a jump on Monday.

The retreat by commodity prices meant gold miner Randgold Resources dropped 62p to 4,891p on a shortened FTSE 100 fallers board.

Mexican precious metals miner Fresnillo was the biggest casualty, shedding 88p to 882p, also under pressure after reporting a 64 per cent drop in pre-tax profit.

Equipment hire group Ashtead topped the FTSE 100 gainers, up 69.7p to 945.7p after unveiling a 51 per cent jump in third-quarter profits and raising its full-year profit  target.

On the second line, troubled outsourcer Serco improved 15.65p to 465.45p after investors in the FTSE 250 company were spared further downgrades to forecasts.

Profits for last year were down 62 per cent as a result of one-off charges and restructuring relating to the scandal over its criminal tagging contract. Serco stuck by its forecasts for this year after a profits warning in January reduced guidance to between 220million and 250million.

Other risers in the FTSE 250 Index included comparison website Moneysupermarket after it posted higher profits and hiked its full-year dividend to shareholders by 30 per cent. The stock was 7.7p higher at 187.7p.

10.25: The FTSE 100 is holding onto early gains despite further bitter exchanges between Russia and the US, which saw a Kremlin aide say his country could drop the dollar as a reserve currency.

The aide was also quoted as saying that if the US were were to impose sanctions on Russia over the situation in Ukraine, Moscow might refuse to pay off any loans to US banks. Read more here.

Markets have nevertheless calmed today as investors grow more hopeful of a peaceful solution to the crisis in Ukraine. The FTSE 100 was 1 per cent or 72.8 points higher at 6,781.2, having slumped 1.5 per cent yesterday after Russia took control of key sites in the Crimea peninsula over the weekend. 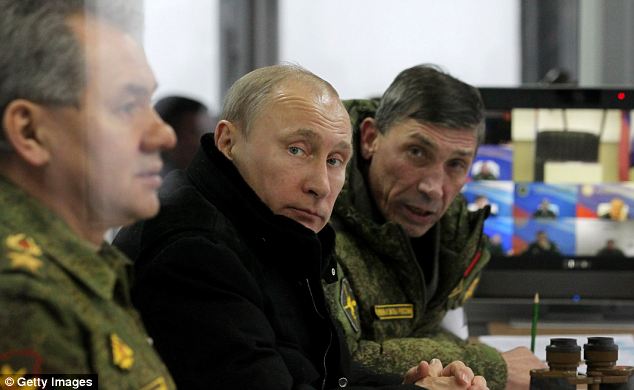 France’s CAC 40 and Germany’s DAX were also up 1 per cent as traders drew encouragement from Russian president Vladimir Putin’s decision to order troops involved in military exercises near the border with Ukraine to return to their bases.

Russia’s MICEX index, which crashed 11 per cent yesterday, also rebounded by 4 per cent this morning.

But with Russian forces still occupying much of Crimea and the threat of sanctions from western Europe still a possibility, analysts said confidence in global stock markets remained fragile.

A shortened FTSE 100 fallers board featured BP after a US federal court rejected the company’s calls to halt payments relating to the Deepwater Horizon oil spill because it believes some firms have filed fictitious claims. Shares were 3.1p lower at 489.7p, on top of a 2 per cent fall seen yesterday.

Top flight newcomer Royal Mail was lower after Credit Suisse started its coverage of the company with an underperform rating and a price target of 530p. Shares were 3p lower at 591p, though still well above the 330p float price.

Markus Huber, an analyst at broker Peregrine & Black, said: ‘While the crisis between the Ukraine and Russia is far from being resolved traders are relieved that tensions haven’t increased overnight.

‘After Russia flexed its muscles yesterday by displaying their military superiority, the news that Putin suspended maneuvers close to the Ukrainian border has been interpreted as a sign that the Russian president might be on a less confrontational course for now and instead might be ready to sit down and at least hold talks.

‘The economic and corporate data calendar is on the light side today, which doesn’t matter much anyway at this stage as the situation in Ukraine is expected to continue to dominate market action for the foreseeable future.

‘Overall markets remain very fragile and it needs to be seen if stocks can indeed hold on to their gains as the day progresses. It certainly wouldn’t take much to spook investors again.’

Ishaq Siddiqi, market strategist at ETX Capital, said: ‘Russian President Putin has ordered troops to return to their bases after what Russia called an exercise – although this was the official line Russia went with, global markets have been anxious that the mobilisation of Russian troops could mean something more serious. 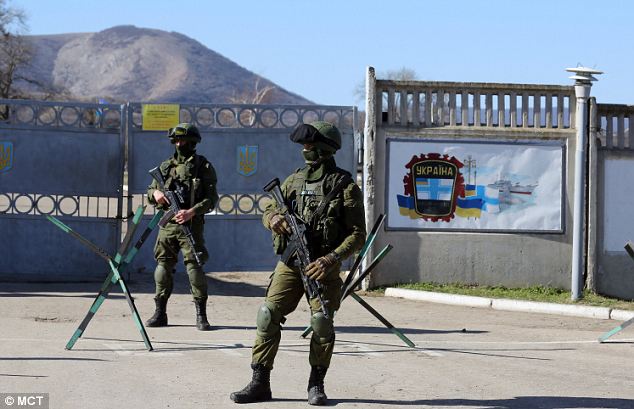 Ukraine crisis: Russian soldiers stand guard next to a Ukrainian military base in the town of Bakhchisarai in the Crimea

‘Putin is set to speak shortly – his speech will be carefully dissected by the world. On Monday, market participants dumped risky assets in favour of traditional safe havens on the prospects of a “new cold war”, leading to deep falls for the Russian stock market and the rouble currency.

‘This morning however, Russian stocks are rallying while the rouble is on the rebound on news of Russian troops being sent back to their bases; a sign that military action is not imminent although cannot be ruled out between Russian and Ukrainian forces.

‘This has led to risk appetite in Europe to improve too, further helped by a firmer an Asian session although market sentiment remains fragile and anxious at best with traders transfixed with developments in the Ukraine.

‘The question of economic collapse for Ukraine continues to weigh on sentiment as the country is now in desperate need for funding to service debts – at the moment, the IMF is in Keiv, negotiating a deal but this will undoubtedly have harsh conditions which are likely to devalue the tightly controlled hryvnia currency.’

The FTSE 100 has rebounded 77.2 points to 6,785.5 on relief at Russia’s order to troops on military exercises in central and western parts of its country to return to base.

Russian president Vladimir Putin’s bloodless seizure of the Crimean peninsula in Ukraine over the weekend sparked upheaval on financial markets when they reopened yesterday.

Traders dumped stocks and bought assets traditionally regarded as safe havens in times of trouble – gold, German government bonds, the Japanese yen and the Swiss franc – while the Russian MICEX index and the rouble crashed.

Moscow had denied that its military exercises, which began last week in an area that borders Ukraine, had anything to do with events in its neighbouring country, where Putin has said he has the right to deploy troops to protect Russian compatriots.

‘There’s a perception that maybe we’re going see a ratcheting down of tensions and there’s a possibility that President Putin may be open to dialogue and that’s why markets are bouncing,” said Michael Hewson, chief market analyst at CMC Markets.

‘I would be sitting on the sidelines still because it’s a very fluid situation. We’re going to continue to see a certain amount of volatility and it would be a brave investor who dives back in now.’

He added: ‘Markets will have to get used to the idea that there is unlikely to be a speedy solution to this issue given yesterday’s comments by the Ukrainian prime minister saying it “will never give up” Crimea.

‘Given that the Russians are already there, and getting more entrenched by the day, it is very difficult to imagine a scenario that could compel them to leave quickly. As such we can expect further jawboning and posturing from both sides which are likely to keep markets on edge.

‘Furthermore the prospect of EU imposed trade sanctions, could well raise the stakes and prompt a counter reaction from Russia.’

Traders said market sentiment was also being supported today by speculation the European Central Bank may loosen lending conditions at a meeting on Thursday.

The bank’s president Mario Draghi said late yesterday that inflation in the eurozone was ‘way below’ its goal.

BP: A divided US appeals court rejected BP’s bid to block businesses from recovering money over the 2010 Gulf of Mexico oil spill, even if they could not trace their economic losses to the disaster.

SERCO: The embattled outsourcing group said it was braced for a tough 2014 as it recovers from the impact of government contract failures, profit warnings and management exits that pushed 2013 annual profit down 6 per cent.

FRESNILLO: The Mexican precious metals miner reported a 64 per cent drop in pre-tax profit, falling short of analyst expectations. It was affected by tumbling gold and silver prices last year and a ban on the use of explosives at one of its mines.

GLENCORE XSTRATA: The firm posted forecast-beating core profit in the first set of full annual results since the commodities group was formed, helped by a strong performance of its trading arm offsetting a decline in its mining division.

ASHTEAD: The industrial equipment hire group raised its full-year profit expectations after strong demand in the US and Britain helped drive its profits 54 per cent higher in the third quarter.