Overall the FTSE 100 index was down 12.7 points at 6,797.6, but it still looked likely to post its best month in seven after a three-week rally that on Monday lifted it to a 14 year closing high and within touching distance of its all-time peak.

The UK blue chip index outperformed European shares, which were knocked back by stronger than expected inflation data which dampened expectations the European Central Bank would consider additional stimulus measures on top of record-low rates when it meets for its monthly council meeting next Thursday. 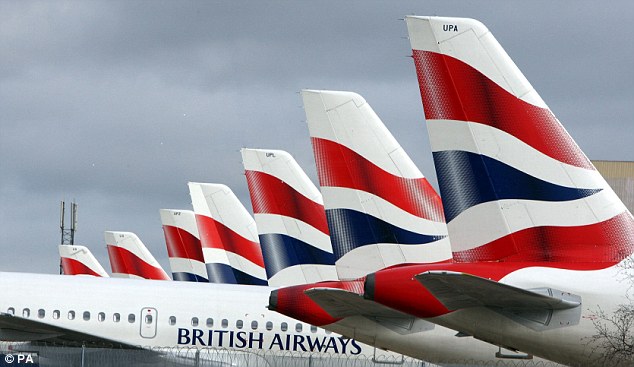 The European Union’s statistics office Eurostat estimated that consumer prices in the 18 countries sharing the euro rose 0.8 per cent year-on-year in February, 0.2 per cent above the expected figure.

That was the same rate as in January and December, after readings of 0.9 per cent in November and 0.7 per cent in October.

‘My feeling is that right now there is strong political pressure on the ECB to refrain from “scaring the horses”, in any way,’ he added.

European airlines group IAG was in the spotlight today after it moved back into profit and reported ‘huge progress’ in the turnaround of Spanish carrier Iberia.

The group, which was formed from the merger of BA and Iberia in 2011, posted an operating profit of 631million  last year, against a loss a year earlier.

It said British Airways continued its solid performance with profits up 377million to 651million as it benefited from additional Heathrow slots and flexibility offered by the integration of bmi.

But IAG shares slipped 15.9p to 434p following a recent strong run for the stock.

‘Despite a return to profitability, an in line only performance appears to have sparked some profit taking,’ said Keith Bowman, equity analyst at Hargreaves Lansdown Stockbrokers.

‘The share price is up by around 105 per cent over the last year alone, outperforming the broader FTSE 100 index by an impressive 98 per cent,‘ he added.

Financial Times publisher Pearson was the biggest FTSE 100 faller, down 70.5p to 1,005.5p, after it said pressures in the US – its largest market – were expected to continue.

The group slashed its guidance for 2014, saying earnings per share would be between 62p and 67p in 2014 against expectations for a rise to 75p a share.

Chief executive John Fallon is working through a restructuring plan and said he expected stronger returns in 2015 and beyond.

Temporary power firm Aggreko was also sharply lower after it lost its chief executive Rupert Soames to troubled outsourcing firm Serco. Aggreko was down 60.5p at 1569.5p in the top flight.

However, the summer job move was welcomed by shareholders of Serco, with the FTSE 250 stock jumping 8 per cent or 31.5p to 441.9p

Also on the upside, William Hill was one of those blue chips on the front foot after results showed further impressive growth in its online sports book and resilient result at its core betting shop business.

Financial services group Old Mutual was the top blue chip riser, up over 5 per cent or 1.1p to 196.3p after it posted a 15 per cent jump in earnings on a constant-currency basis and announced plans to spin-off a minority stake in its US asset management business.

09.55: The Footsie dropped back from opening gains as the morning session progressed, with investors staying nervous over the situation in Ukraine and as they Eurozone awaited inflation numbers, with deflationary pressures building in Britain’s biggest trading partner.

By mid morning, the FTSE 100 index was down 16.4 points at 6,793.9 on the final session of February although it is still on course to post its best month in seven after a three-week rally that has left it within touching distance of its all-time high.

While that rally has stalled this week, the FTSE 100 is still only 2 per cent below its record peak, set in 1999. 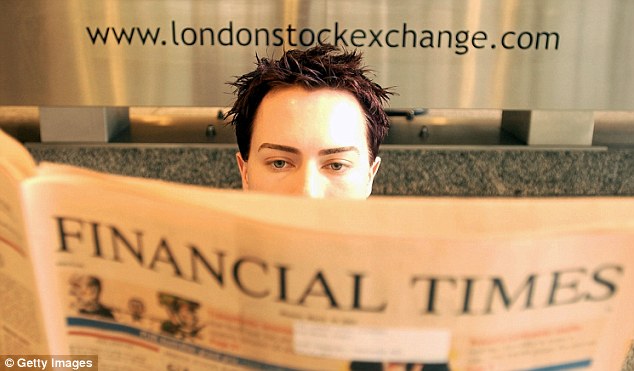 Pearson plunge: The publisher of the Financial Times saw its shares drop today after it said pressures in its largest markets were expected to continue.

Jeremy Batstone-Carr, analyst at Charles Stanley said: ‘The market looks overvalued, and there’s potential complacency creeping in, just as we were in mid-January before the emerging market scare. ‘Investors are clearly looking to downplay the threat of contagion, however, and the FTSE feels as though it wants to go through its record before it takes a breather.’

The UK blue chip has rallied strongly after hitting a 2014 low early in February, but it has fallen around 0.5 percent since Monday as the political turmoil in Ukraine and fresh concerns about China’s economy have revived concerns about emerging markets.

The 4.7 percent gain posted so far this month would make it the best February since 1999.

Bookmaker William Hill was among those on the front foot after it highlighted a ‘sparkling’ performance from its online sports book and a resilient result at its core retail business.  Despite annual profits falling slightly to 257million, shares rallied 12p to 386.85p.

Textbooks and Financial Times publisher Pearson moved in the opposite direction, down 83.75p to 992.25p, after it said pressures in its largest markets were expected to continue.

Pearson’s operating profits fell 21 per cent to 736million last year as a result of difficult conditions in the US education market. Chief executive John Fallon is working through a restructuring plan and said he expected stronger returns in 2015 and beyond.

But the summer move was welcomed by shareholders of the troubled outsourcing company as the FTSE 250 stock jumped 40.6p to 451.4p.

South African paper maker Mondi was also a good gainer riser, up 39.0p to 1,074.0p, after it posted higher 2013 full-year earnings on Friday, helped by benefits from acquisitions in its packaging business.

The FTSE underperformed continental European shares, which were buoyed by the prospect of further European Central Bank easing if CPI inflation data at 1000 GMT points to deflation risks in the euro zone economy.

The threat of below-target inflation is prompting the ECB to consider additional stimulus measures on top of record-low rates, just as the US Federal Reserve is winding down its own stimulus policies.

08.40: The Footsie was modestly higher in early deals on the final day of February, extending yesterday’s late rally in tandem with an overnight advance in New York, although gains were limited by ongoing worries over the volatile situation in Ukraine.

At open, the FTSE 100 index was up 6.0 points at 6,816.2, having added 11.12 points yesterday after positive US economic data and assurances on monetary policy from new Federal Reserve chief Janet Yellen provided Wall Street with a lift.

Craig Erlam, market strategist at Alpari (UK) said: ‘Clearly the markets aren’t taking much direction from the US, where the S&P finally managed a new record close following numerous attempts. 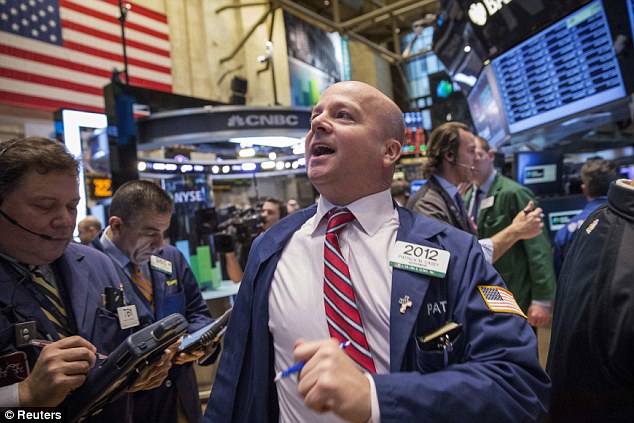 Stocks advance: The Footsie moved higher on the finals ession of February buoyed by overnight gains on Wall Street

‘The Asian markets overnight didn’t take much of a cue from the US session. The biggest loser here was the Nikkei which fell 1.1 per cent on a strengthening yen, which broke through a key level against the dollar and could be the start of a much bigger rally, and therefore mean further losses heading into next week.’

And British consumer sentiment held steady as expected in February and matched January’s level, the highest in more than six years, a survey from researchers GfK showed today.

GfK’s headline consumer confidence index stayed at -7 this month, which was jointly with January the best reading since September 2007, around the start of the financial crisis.

But investors will also be closely watching some key CPI inflation and unemployment data from the eurozone this morning, with Britain’s biggest trading partner worried by with deflationary concerns.

‘With the ECB meeting next week and the risk of deflation already a hot topic in the markets and at the central bank, all eyes will be on the eurozone CPI release this morning’ said Craig Erlam.

‘Should inflation fall again in February, the ECBs hands may be tied, regardless of whether their inflation expectations are, apparently, well anchored. This seems to be the go to answer whenever ECB President Mario Draghi is pressed on why the central bank is doing nothing to achieve its only target of below, but close to, 2 per cent.’

PEARSON – The publisher of the Financial Times said it expected 2014 earnings to fall, after posting annual results within the range of already downgraded forecasts due to the hit from the deteriorating US education market.

IAG – International Airlines Group reported consensus-beating annual profits on a strong performance from British Airways and its low-cost Spain-based carrier Vueling, and said it was on track to meet its 2015 targets.

WILLIAM HILL – The betting firm said it plans to save 15-20million in costs in 2015 to offset a planned tax on online operations, as it lifted its dividend up to 11.6p a share.

RENTOKIL – The support services firm has said agreed to sell its Initial Facilities business to Interserve for 250million.

UTILITIES – Ofgem will intensify pressure on the big six energy  companies by demanding that they hand back hundreds of millions of pounds in surplus customer funds, Sky News reported.