12.45: Falls by miners weighed on the Footsie at lunchtime after figures from top metals consumer China showed a contraction in manufacturing, while BAE Systems was the top in London after the defence giant missed expectations on 2013 profits and cut its guidance for this year.

The FTSE 100 Index fell 19.5 points to 6777.2, although this was better than a 1.3 per cent decline in Frankfurt and 0.5 per cent fall in Paris with European bourses knocked by data showing that an expected acceleration in activity across the Eurozone failed to materialise this month.

The Eurozone Markit Composite Purchasing Managers’ Index, which is based on surveys of thousands of European companies, dipped to 52.7, just below January’s 31-month high of 52.9. That missed economists expectations for a rise to 53.1.

Centrica up: The owner of British Gas saw its shares rise today in spite of reporting a dip in profits.

Torben Kaaber, CEO of Saxo Capital Markets said: ‘While the eurozone has been showing signs of recovery, growth continues to be slow and uneven. The eurozone is far from being out of the woods and today’s PMI data supports that fact.’

Meanwhile, in the UK, the latest CBI industrial trends survey showed 26 per cent of firms reporting that total order books were above normal in February, while 23 per cent said they were below giving a balance of +3 per cent, an increase from January’s -2 per cent figure and well above the long-run average of -17 per cent, although it was below December’s +12 per cent balance.

Howard Archer, chief economist for HIS Global said: ‘The February CBI Industrial Trends survey indicates overall that the manufacturing sector is performing pretty well in the first quarter of 2013, but has come modestly off the peak levels seen in late-2013.’

On currency markets, the pound rose against the euro but dipped back against the dollar today.

The prospect of higher interest rates boosted the US dollar after a spell in which the greenback has fallen to a four-year low against the pound after some members of the US Federal Reserve in minutes of the last FOMC meeting fuelled speculation that interest rates may go up sooner than Wall Street had been expecting.

Miners exerted the most downward pressure on the FTSE 100 index with Anglo American the worst off as it shed 49.5p at 1,359.5 after factory activity in top metals consumer China shrank again in February reinforcing concerns of a minor slowdown in the economy.

BAE shares led the fallers board in London by some distance – down 36.25p to 400.5p – as it warned earnings per share were expected to reduce by between 5 per cent and 10 per cent this year.

The firm is is feeling the heat from US defence spending cuts which last year caused pre-tax profits to fall by 65 per cent to 422million.

But British Gas-owner Centrica was on the up, 4.4p higher at 318.4p despite reporting a fall in profits today.

Centrica went on the offensive in the wake of a 2 per cent decline in operating profits to 2.7billion for last year. The company said that it is confident of a return to customer growth at British Gas, helped by the recent launch of new fixed price deals.

10.05: Shares in BAE Systems took a hammering today after the defence giant missed expectations on 2013 profits and cut its guidance for this year, leading a depressed Footsie lower in early morning trade.

Investors were spooked by figures showing a fresh contraction in Chinese manufacturing, which drove heavyweight mining stocks lower in London, and by news from last night’s Federal Reserve FOMC meeting minutes that showed some US policymakers believe interest rates should be raised sooner than markets had been expecting. 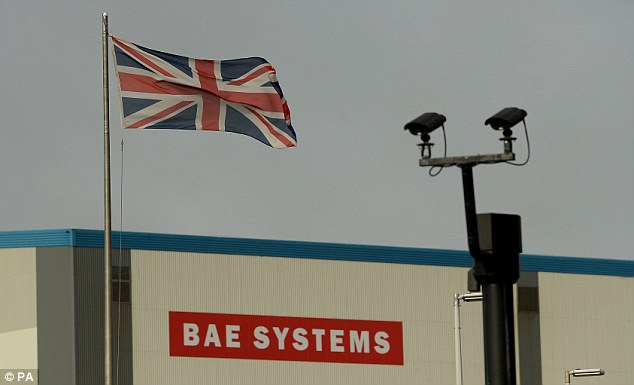 Defence cuts: BAE Systems shares dropped after the defence giant missed expectations on 2013 profits and cut its guidance for this year

Markus Huber, senior sales-trader/analyst at Peregrine & Black said: ‘While the weak PMI figure out of China and the slightly negative market reception of the FOMC Minutes could certainly be an ideal ‘excuse’ to push markets sharply lower today, they shouldn’t necessarily be a major game changer in the medium and long-term what overall stock markets are concerned, mainly because the global economy is still expected to accelerate as 2014 progresses.’

BAE shares led the fallers board in London, dropping over 9 per cent, or 40.0p to 396.9p as it warned that its earnings per share are expected to fall by between 5 per cent and 10 per cent this year.

Like engine maker Rolls-Royce last week, BAE is feeling the heat from US defence spending cuts which last year caused pretax profits to fall by 65 per cent to 422million.

A results disappointment also weighed on drinks can manufacturer Rexam today after it reported a 4 per cent rise in pretax profits to 372million. Shares were off 39.35p to 485.15p.

But British Gas owner Centrica saw its shares rally from early falls to add 1.3p at 315.3p after the company went on the offensive in the wake of a 2 per cent decline in operating profits to 2.7billion for last year.

Residential arm profits were down 6 per cent to 571million as chief executive Sam Laidlaw insisted price controls were not a ‘credible solution’.

As a sector, miners exerted the most downward pressure on the FTSE 100 index with Anglo American the worst off as it shed 49.5p at 1,359.5 after factory activity in top metals consumer China shrank again in February reinforcing concerns of a minor slowdown in the economy.

India-focused miner Vedanta Resources was the standout faller among the mid-caps, dropping 6.5 per cent, or 59.5p to 850.5p, with the stock also hit by a downgrade to ‘underweight’ by HSBC, which cited sluggish cash flow generation.

08.30: The FTSE 100 has slid 57.6 points to 6,739.1 after US Federal Reserve minutes revealed a dogged determination to keep cutting stimulus and fresh China data showed a drop in factory activity.

The record of the Fed’s latest policy-setting meeting indicated that the central bank will keep trimming its bond-buying  programme unless there is a significant economic surprise.

The minutes triggered a late sell-off on Wall Street last night, sending the Dow Jones down 89.8 points to 16,040.6 by the close. 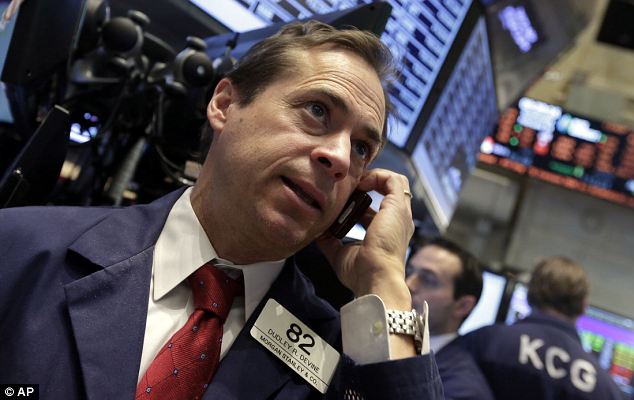 Market watch: Traders were rattled by US Federal Reserve minutes which revealed a dogged determination to keep cutting stimulus

China’s flash Markit/HSBC Purchasing Managers’ Index (PMI) revived worries about the pace of global growth after it fell to a seven-month low of 48.3 in February from January’s final reading of 49.5. A reading below 50 indicates a contraction while one above shows expansion.

The news sparked falls on Asian markets, with the Japan’s Nikkei ending its session 317.4 points lower at 14,449.2.

The Royal Bank of Scotland has opened down 3 per cent or 9.2p at 350.2p this morning after a broker downgrade by Investec from a hold to a sell recommendation.

Michael Hewson of CMC Markets said of the latest news from the Fed: ‘The minutes showed that Fed officials had few doubts about tapering asset purchases further at the January meeting.

‘The minutes also showed that a further $ 10billion was more than likely in March, with only a couple of officials having reservations, and that forthcoming meetings could well see a change to the Fed’s forward guidance mechanism, as the unemployment rate nears its guidance threshold.

‘More importantly two other Fed officials, in addition to the hawkish pair of Charles Plosser and Richard Fisher, indicated that the bar to a slowdown in the pace of tapering was very high, in comments made yesterday by both Dennis Lockhart of the Atlanta Fed, and John Williams of the San Francisco Fed.

‘Judging by those comments yesterday it would appear that the Fed is happy to look past the recent spate of bad data as being largely caused by the recent poor weather.’

BAE SYSTEMS: The defence firm posted a 3 per cent rise in full-year profit, in line with analysts’ expectations. But it forecast continuing US budget pressures would reduce earnings per share by 5-10 per cent this year compared with 2013.

CENTRICA: The utility, which owns the country’s biggest energy supplier British Gas, posted a 2 per cent drop in 2013 adjusted operating profit due to an increase in costs in its electricity and gas supply segment.

ESSAR ENERGY: FTSE said it had suspended the deadline for London-listed Essar Energy to meet a minimum free float rule pending the result of a potential offer by Essar Global Fund Ltd to buy out the remaining stake in the company.

LLOYDS BANKING GROUP: Lloyds has opted to base TSB in England rather than Scotland ahead of the new bank’s 1.5billion stock market float, the Telegraph reported.

BG GROUP: The oil and gas firm has bought six liquefied natural gas cargoes from Italian utility Enel as it seeks to replace lost supplies from its Egyptian operations.

PETROFAC: The company said it had been awarded an Oman contract by BP.