14.20: Trading is quiet in London today as US markets are closed for Martin Luther King Day.

There was little impact from Chinese GDP growth figures, which dipped to the lowest level since 1999 at 7.7 per cent but still came in 0.1 per cent ahead of estimates. 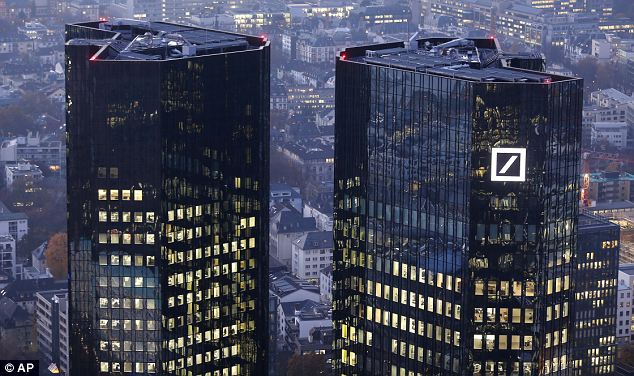 Banks were the heaviest fallers today after the outlook for their results next month was clouded by a big loss from Deutsche Bank. Barclays was down 3.6p to 284.9p and Royal Bank of Scotland slipped 8.1p to 355.6p .

BT shares were also under pressure after the Sunday Times reported that Vodafone and satellite broadcaster BSkyB have been exploring ways to strengthen their position against the telecoms firm.

It said the two companies have discussed deals on Sky’s sports and movie channels as well as collaborating on a high-speed broadband service. BT’s shares were 3.6p lower at 379.8p and Vodafone dropped 1.4p to 238.6p. BSkyB, which is due to release results next week, was 11p higher at 851p.

Outside the top flight, shares in Mothercare surged on the back of speculation that Tesco is considering a swoop for the babycare products retailer as part of its wider campaign to inspire a turnaround at its larger supermarkets.

Retail sources told the Sunday Times that Tesco had examined a bid six months ago but put the plan on hold. Shares in Mothercare still rose 6 per cent or 15.25p to 287.25p and Tesco fell 1.5p to 329.5p.

Max Cohen, financial sales trader at Spreadex, said: ‘European indices are trading little changed after a lifeless start to the week with all headline equity gauges trading within a tight range.

‘This comes following last week’s renewed demand for equities on the back of encouraging US data.’

David Madden, market analyst at IG, said the market was experiencing a sluggish start to the week.

‘Mixed reports from China overnight have left traders perplexed; the headline GDP figures exceeded expectations, but this was offset by the lower-than-expected industrial production and fixed asset investment numbers,’ he said.

‘The mining sector had a good run last week on the back of bargain hunting and broker upgrades, and after the Chinese numbers today it doesn’t know which way to turn.’

But London-listed bank stocks are taking a hit from a surprise fourth quarter loss by German giant Deutsche Bank.

Germany’s biggest lender racked up a deficit due to a fall in revenues as well as one-off expenses and losses on investments.

Its 31 per cent year-on-year drop in revenues from fixed income, commodity and currency trading – commonly known in the City as ‘FICC’ business – follows disappointing updates in this area from the large US investment banks.

Gary Greenwood, a banking analyst at Shore Capital stockbrokers, said ‘FICC’ accounted for approximately 20 per cent and 15 per cent of total group income at Barclays and RBS respectively last year

Elsewhere in the FTSE 100, oil and gas engineer Weir was among the top risers after a gain of 77p to 2214p.

However there was further pressure on Royal Dutch Shell after its profits warning on Friday. The stock was down 19.75p to 2259.75p after a similar fall over the previous session.

Toby Morris, senior sales trader at CMC Markets, said: ‘Unsurprisingly Europe has been very quiet this morning, sticking in a tight range on pretty low volume with the US closed for Martin Luther King Day.

‘Without the US, we are a bit light on fresh data to see the markets want to pull too hard in either direction, with Chinese GDP numbers providing the focal point of the day so far.

‘Chinese GDP growth dipped to its lowest level since 1999 at 7.7 per cent, but still came in 0.1 per cent ahead of estimates and on balance it seems Europe hasn’t really taken too much from it. You would tip the rest of the day to remain very subdued in the absence of anything new.

He went on: ‘For single stocks the big story on the continent this morning was Deutsche bank, who reported a “surprise” pre-tax loss of $ 1.15billion for the fourth quarter on litigation and restructuring costs.

‘Commentary this morning would indicate the market has been thrown a curveball by the figures, but previous releases have given us warning signs that there would be heavy impairments in the fourth quarter, while their extended lawsuits and regulatory issues were already well documented.’ 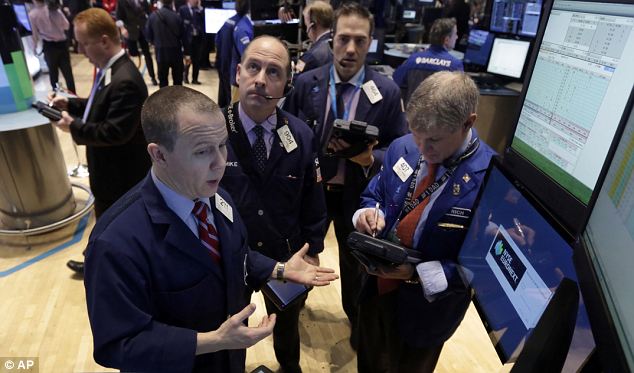 Ishaq Siddiqi, market strategist at ETX Capital, said: ‘Deutsche Bank this morning warned on profits; nasty set of numbers which have geared investors here in Europe for what could be an ugly earnings season for European banks.

‘Deutsche Bank blames [a] slowdown in debt markets, deterioration in fixed income business and litigation expenses – at the same time, the bank continues to restructure itself, dragging on profitability until the process ends.’

He added: ‘As such, shares in Barclays and Royal Bank of Scotland are both lower on the back of the pronounced deterioration of fixed income trading divisions for investment banks; both have bulky fixed income trading operations which are not immune to the trend noted across the industry.

‘For Deutsche Bank, the surprise profit warning certainly has rattled investors who are worried that bank management has failed to restructure the group and are unable to get on top of the litigation scandal.’

Investors are likely to trade cautiously after news that Chinese economic growth eased to 7.7 per cent in the last quarter of 2013, from 7.8 per cent the previous quarter.

Some analysts predict the world’s second-largest economy will keep losing momentum this year.

Traders will focus on the earnings season this week, as major European and US companies such as Unilever, Nokia, Johnson & Johnson, Microsoft and Xerox are scheduled to announce results.

Trading is likely to be thin today as US markets are closed for the Martin Luther King Day holiday.

TESCO, MOTHERCARE – Tesco considered a bid for mother and baby products retailer Mothercare to help reinvigorate its British hypermarkets, the Sunday Times reported, with the supermarket putting the plan on hold six months ago.

However, the recent fall in Mothercare’s share price could rekindle Tesco’s plan according to the City insiders – though they added Tesco has made no approach so far.

LEGAL & GENERAL: Insurance group Legal & General wants to build five new towns across Britain over the next ten years at a cost of up to $ 5billion, the company’s chief executive told the Sunday Times.

ROLLS ROYCE: The Serious Fraud Office has received additional funding from the UK Treasury in its probe of alleged bribery and corruption by defence group Rolls-Royce in China and Indonesia, the Financial Times reported, citing sources.

LAURA ASHLEY: The clothing retailer announces a bonus interim dividend of 1 pence per share for the year ending January 25 2014.

PORTMEIRION: The ceramics manufacturer said it anticipated record revenues for 2013 of over 58million, with pre-tax profit expected to be in line with market expectations.

AMARA MINING: The miner sees gold output rising in 2014 after an 86 per cent increase in production in the fourth quarter compared to the previous quarter.

HR OWEN: The motor dealer sees full-year results coming in ahead of expectations, after used car trading performance continued to be very strong with volumes up by almost a third.