14.10: The Footsie ticked up into positive territory early afternoon, recovering from earlier falls on hopes for an opening rally today in New York after December retail sales came in ahead of expectations.

The US Commerce Department said retail sales excluding automobiles, gasoline, building materials and food services, increased 0.7 per cent last month after a 0.2 per cent rise in November, suggesting the economy gathered steam at the end of last year. Economists had expected core retail sales to rise 0.3 per cent in December.

The FTSE 100 index edged 0.8 points higher at 6,757.9 but gains remained very tentative as concerns over US corporate earnings continued to overshadow the positive macroeconomic signs.

After a batch of US companies posted weak quarterly earnings or forecasts on Monday, US bank JPMorgan Chase today reported lower-than-expected earnings per share. 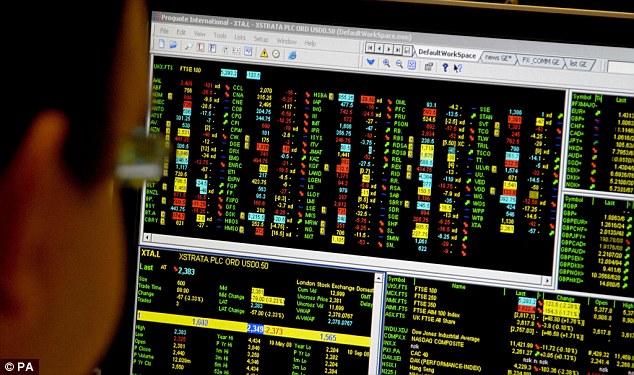 FTSE fragile: The Footsie ticked higher but gains were slim amid underlying concerns over corporate earnings

With US stock indices having jumped higher last year, forward price-to-earnings ratio are at their highest levels in nearly seven year, making investors wary of paying such a high premium for earnings that may see growth stall.

‘Earnings and outlooks have to be good for us to continue to go up,’ said Nick Xanders, head of strategy for BTIG.

12.15: Concerns that an impending US fourth quarter corporate earnings season could disappoint the market weighed on UK blue chips midsession, leading to a reversal of recent gains.

Fund managers bore the brunt of the selling pressure with the sector spooked by figures from Ashmore Group which showed large net outflows from its funds at the end of last year as investors took fright at heightened volatility in its core emerging markets.

Ashmore said clients withdrew $ 3.5billion more from its range of funds than they put in during the last three months of 2013. That compared with forecasts for net fund inflows of $ 1.4 billion by analysts at Numis Securities.

Analysts also highlighted a change to the basis of the calculation for annual investment management fees on two of Ashmore’s closed end funds during the quarter, which led to a $ 25million reduction in its revenues. 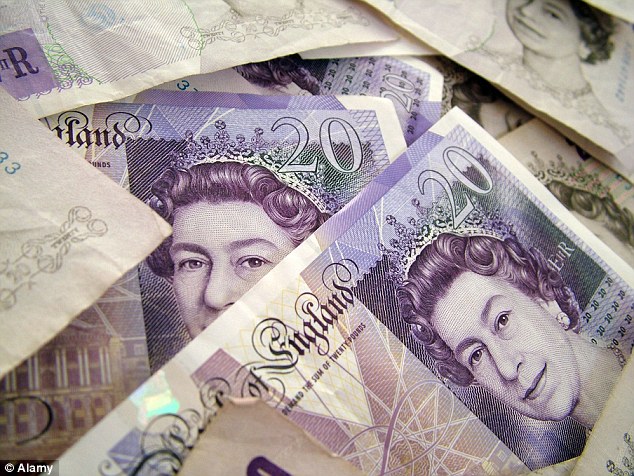 Cash withdrawals: Fund managers suffered as peer Ashmore Group reported large outflows from its funds in the final quarter of 2014

Numis said overall it was a ‘disappointing statement’ from Ashmore and the broker expects to cut its earnings forecasts for the firm by 5-10 per cent.

11.15: Gloom on Wall Street has crossed the Atlantic, making for a downbeat session in London.

American shares enjoyed big gains in 2013, but have so far struggled for momentum in the new year, with the prospect of policymakers cutting back on economic stimulus and a run of weak corporate updates dampening market sentiment.

The Dow Jones finished 1 per cent lower last night as confidence was hit by Friday’s employment report that showed fewer jobs were added in December than economists had forecast. 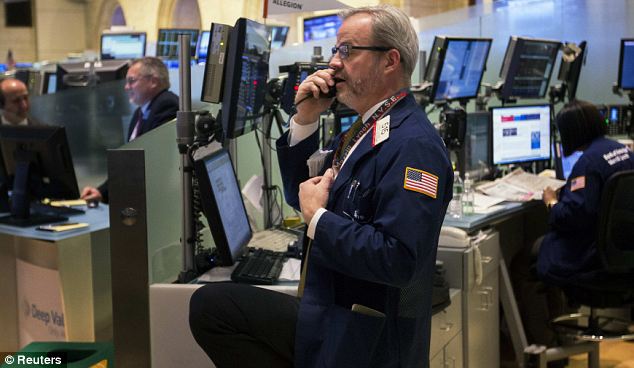 US jitters: A series of weak company earnings updates and forecasts is worrying investors

This was followed by key Federal Reserve officials signalling they planned to continue voting to ‘taper’ or cut its stimulus programme despite this apparent setback in the US jobs market.

But BSkyB moved in the opposite direction, up 28.25p to 867.75p, after broker UBS placed a buy rating on the home communications business.

Elsewhere, menswear specialist Moss Bros saw shares race 20 per cent ahead after it said full-year profits were set to beat market expectations thanks to a sales surge over Christmas.

Like-for-like sales rose 12.9 per cent in the five weeks to January 11, while the group also announced plans to accelerate its dividend policy to hand more cash back to investors, sending shares up 14.8p to 89p.

Barratt shares dipped 2.85p to 378.15p despite the housebuilder announcing a 17 per cent jump in total home sales to 5,953, excluding joint ventures with other developers, in the second half of 2013.

Some 29 per cent of these transactions involved a buyer using the Government’s controversial Help to Buy booster scheme to find a loan. Read more here.

Meanwhile, official figures show the consumer price inflation rate slowed to to a four-year low of 2 per cent in December. Read more here.

Howard Archer, economist at IHS Global Insight, said it was pleasing news for the Bank of England and some further relief for consumers.

‘Inflation has come down from a peak of 2.9 per cent in June and is now back down to the Bank of England’s 2.0 per cent target rate for the first time since November 2009 (when it was actually just below at 1.9 per cent).

‘Near-target inflation facilitates the Bank of England keeping interest rates down at 0.50 per cent where we believe they are highly likely to stay through 2014 despite current rapidly falling unemployment.’

‘In London, equities have followed Wall Street lower after [Fed official] Dennis Lockhart stated his support for additional tapering. Added to that we have the mix of soft payrolls figures and an underwhwelming start to the US reporting season.’

Anita Paluch of Varengold Bank said: ‘It is fair to say it is a broad-based sell in European equities today. All major European indices are on the lower side, losing ground on the back of poor performance in the US and Asia.

‘So much has been expected from this earning season and so far the sparkles are not materialising, with most companies lowering their estimates in pre-announcements.

‘And while [aluminium firm] Alcoa has traditionally kicked off the earning season, this week is going to be heavily dominated by financials with Wells Fargo and JP Morgan reporting today. Banks are expected to have done better.’

10.50: The rate of inflation fell to the Bank of England’s target of 2 per cent for the first time in over four years in December.

Today’s CPI figure from the Office for National Statistics defied expectations that there may be a small rise from November’s 2.1 per cent figure, spurred by gas and electricity price hikes.

Inflation is now at its lowest level since November 2009, when it stood at 1.9 per cent.

8.30: The FTSE 100 has opened down 48.2 points at 6,708.9,, tracking sharp losses on Wall Street following disappointing corporate earnings and outlook statements which raised concerns about profit growth.

The Dow Jones fell 1.1 per cent, the S&P 500 lost 1.3 per cent and the Nasdaq dropped 1.5 per cent after a number of mid-sized companies including SodaStream, Lululemon Athletica, Express Inc and Aaron’s posted weak updates yesterday.

Japanese stocks also tumbled more than 3 per cent and the yen hit a four-week high against the dollar after last week’s surprisingly weak US jobs report, which caused anxiety about the growth outlook in the world’s biggest economy.

Almost 10 out of every 11 companies in the S&P 500 which have made pre-announcements for the current earnings season companies lowered estimates, according to Thomson Reuters data.

Today the focus will be on JPMorgan and Wells Fargo, both set to post quarterly results before the opening bell on Wall Street.

Traders are also mulling the impact of last week’s jobs US update on the Federal Reserve’s plans to reduce or ‘taper’ its vast stimulus programme, which has helped boost stock markets around the world over the past few years.

Michael Hewson of CMC Markets said: ‘Since Friday’s disappointing payrolls report we’ve heard from a number of Fed policymakers who insisted that any decision to taper further would not be swayed by last week’s numbers with Atlanta Fed President Dennis Lockhart following St Louis Fed member James Bullard by saying that he would continue to support further reductions in stimulus.

‘This seems to have accounted for the sharp sell-off seen late yesterday evening which saw the S&P500 post its worst day in two months, as the dial starts to shift away from what had been until recently a one-way bet on stock markets.

‘Given that this year’s voting members now include the rather more hawkish Dallas Fed’s Richard Fisher and Charles Plosser of the Philadelphia Fed, the prospect of another reduction of stimulus at the end of this month, set against rather lofty valuations has seen investors decide to take some money off the table in a week that sees US earnings start to come in thick and fast starting with JP Morgan this afternoon.’

Back in the UK, inflation data for December is due out later this morning.

A rally in banking shares helped the FTSE 100 hit a two-month closing high yesterday, with the index finishing 17.21 points ahead at 6,757.15.

Brent crude is holding above $ 106 a barrel after slipping in the previous session as Libyan supply picked up and the restart of Iranian oil shipments appeared to get closer.

ASTRAZENECA: The firm said it expected to return to growth after a wave of drug patent expiries earlier than analysts currently forecast, with 2017 revenue likely to be broadly in line with the 2013 level.

CAPITA: The company signed a contract with Transport for London to run congestion charging and low emission zone schemes. The agreement is expected to generate revenue of approximately 145million..