17.30 (CLOSE): The spotlight fell on retailers on the first day of new year trading after troubled Debenhams announced the resignation of its finance boss.

Shares in the department store chain – which issued a shock profits warning earlier in the week – picked up 3 per cent on the announcement that chief financial officer Simon Herrick was to leave.

Rivals also saw gains after sparkling festive performances were reported by House of Fraser and John Lewis, though the wider performance of equities was gloomy, with the FTSE 100 Index down 31.2 points to 6717.9, or nearly 0.5 per cent. 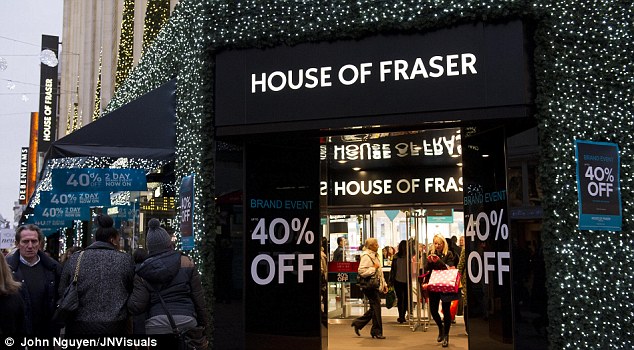 Rebound: While Debenhams struggled, there was better news for the House of Fraser.

After recording its best year since 2009 earlier this week, the top tier was hit by worries over China after survey data pointed to slowing factory activity, leading to falls among mining stocks.

But there were better figures from UK manufacturers after the closely watched Markit/CIPS purchasing managers’ index (PMI) revealed the sector’s best quarter for more than two-and-a-half-years – despite the reading dropping slightly on a month-on-month basis in December.

Stock market falls were seen in Europe as investors took profits after an end-of-year rally. France’s Cac 40 and Germany’s Dax were each down by more than 1 per cent, while on Wall Street the Dow Jones Industrial Average was in the red too.

On currency markets, sterling fell by a cent to 1.64 US dollars after well-received data from America’s manufacturing sector strengthened the greenback. The pound was flat against the single currency at 1.20 euros.

FTSE 250-listed Debenhams saw shares recover ground after Tuesday’s 12 per cent plunge in spite of more woes after Mr Herrick quit in a torrid week for the group.

It warned on Tuesday that half-year profits were expected to fall by more than a quarter after missing out on an expected sales surge in the week before Christmas, blaming tough high street conditions and bad weather.

Analysts at Numis Securities cautioned the trading problems at Debenhams were ‘more company-specific than market-led’, but shares climbed 2.2 to 75.2p.

There were also gains for FTSE 100 competitors that had fallen earlier this week after the Debenhams alert thanks to buoyant trading updates from John Lewis and House of Fraser.

John Lewis said like-for-like sales climbed 6.9 per cent over the five weeks to December 28, while House of Fraser hailed its best ever Christmas with comparable sales up 7.3 per cent.

Next lifted 80p to 5530p ahead of its update tomorrow and Primark parent Associated British Foods added 43p to 2488p.

A number of miners fell amid fears over demand from China’s manufacturing industry, with Anglo American the worst hit in the sector, down 28p to 1292p. Rio Tinto fell 39.5p to 3370p.

15.45: The Dow Jones is still stuck in the red following news that US manufacturing activity slowed somewhat in December, although it still beat forecasts.

The US ISM index came in at 57 for last month, against 57.3 in November. A figure above 50 indicates growth and one below means a contraction. 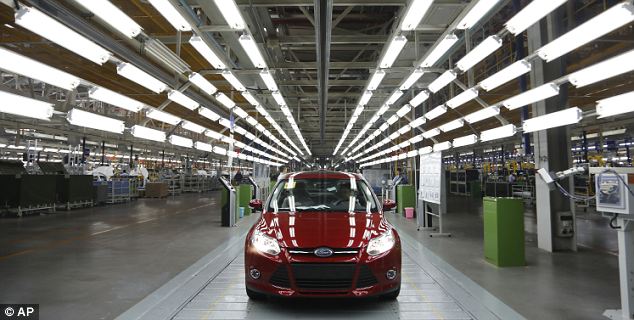 The Dow Jones in New York has opened down 89.4 points at 16,487.2 as US investors react to disappointing Chinese factory data and await news of what happened in their own manufacturing sector in December.

London stocks have made up some lost ground as traders await monthly manufacturing data from the US, which is due out shortly.

Miners litter the fallers board amid fears over demand from China’s manufacturing industry, with Anglo American the worst hit in the sector, down 32p to 1288p. Rio Tinto followed close behind with a 52p fall to 3357.5p.

Retailers remain in focus after troubled Debenhams announced the resignation of its finance boss.

The department store chain – which issued a shock profits warning just two days ago – saw shares pull out of their nosedive following news that chief financial officer Simon Herrick had stepped down from the role with immediate effect and would leave the company on February 7.

As analysts at Numis Securities cautioned the trading problems at Debenhams were ‘more company-specific than market-led’, there were tentative gains for its FTSE 100 competitors thanks to buoyant trading updates from John Lewis and House of Fraser.

Britain’s manufacturing industry ended 2013 with expansion in production and new orders in the sector at a near 22-year high in December, the latest monthly Markit/CIPS survey showed today.

The index registered 57.3, a slight fall on November’s 33-month high of 58.1 but still confirmation that manufacturing ended the year in rude health. Any reading above 50 points to growth, while below 50 indicates falling output. Read more here.

The FTSE 100 has dropped 36.7 points to 6,712.4 as traders digest mixed manufacturing news from around the world, with China and France among the economies prompting concern. A monthly factory activity update from the US is also due out later.

‘After a storming performance in 2013, markets have started the New Year on the back foot with European benchmarks falling into the red after mixed PMI [purchasing managers’ index] figures across the region,’ said Toby Morris, senior sales trader at CMC Markets.

‘While German and Italian numbers beat expectations, the UK fell short of forecasts and France remains a major concern languishing behind its peers with the reading coming in at 47.’

He added: ‘Basic resources was still the worst performing sector for the FTSE in early trade, with weaker Chinese PMI leading to uncertainty surrounding the impact of economic reform for the world’s biggest consumer of raw materials.

‘Many traders had concerns about a potential pullback in the New Year, not only as the seasonal over exuberance of the festive period wears off, but also as the masses start to re-allocate resources for the year ahead.

‘With many equity markets at all-time highs and bond returns creeping up, investors are likely to proceed with caution until the picture for the flows of 2014 starts to clear.’

Brenda Kelly, chief market strategist at IG, said: ‘Trading volumes remain light, but it hasn’t been a great start to the year for the FTSE 100, particularly when taken in context with other European benchmarks which floated near five-and-a-half-year highs before retreating this morning.

‘The rally witnessed in the past week has been subjected to profit-taking. Factory activity growth in China has blighted sentiment and helped to cap gains in equities. Both the official Chinese PMI number and the HSBC metric showed a slowing in the country’s manufacturing sector in December.

‘Over in Europe, PMI manufacturing readings continue to show a general improvement, with Spain and Italy both exceeding analyst expectations.

‘France is starting to become a concern: factory output there posted a seven-month low, which tends to indicate that any recovery in 2014 will be weak-to-moderate at best.’

The FTSE 100 has given up early gains and slid 31.2 points to 6,717.9, as poor factory data from China offset improved news from the eurozone manufacturing sector.

‘However, French manufacturing activity contracted at the fastest rate for 7 months in December, which fuels concerns over the underlying health of the French economy.’ 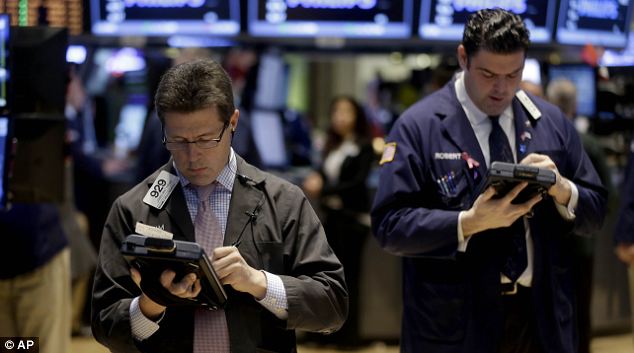 Anita Paluch of Varengold Bank said the data out of China was setting the tone for the day on markets, after an apparent slowdown in manufacturing activity in the world’s second biggest economy

‘In Europe most of the economies are in expansionary mode apart from France,’ she said. ‘And today is the first day Latvia enjoys euro currency – this is not a market mover though, more like political news. It is interesting to note that this is a country with expectations of the strongest growth in the region.’

In corporate news, department store chain Debenhams was back in the spotlight as its finance boss quit after a major profits warning and a bust-up with suppliers over a so-called ‘Santa tax’. Read more here.

The retailer said chief financial officer Simon Herrick had stepped down from the role with immediate effect and would leave the company on February 7. The shares fell 12 per cent on Tuesday, but were up 2 per cent or 1.5p to 74.5p today.

Stocks usually enjoy gains in early January as investors put on fresh bets for the year ahead, and sentiment is likely to be given an extra boost by the strong finish to 2013.

However, progress in today’s session is likely to be capped by weak Chinese data and by the large number of players still on holiday.

China’s factory activity slowed in December, raising concern about the strength of demand in the world’s second biggest economy.

The data from both official and private manufacturing surveys reinforced views that economic growth in China moderated in the final quarter of 2013.

LOOKERS: The car dealership company said its chief executive Peter Jones had retired and would be replaced by Andy Bruce.