12.55: The Footsie pushed modestly higher at lunchtime as hopes for further gains by US stocks after yesterday’s upbeat performance countered disappointing German unemployment figures and a big fall by drugmaker GlaxoSmithKline .

Brenda Kelly, chief market strategist, IG said:’It has not exactly been a busy day for economic data, so the main driver remains last night’s fresh record highs in the S&P 500 that continue to increase the bullish case for indices. 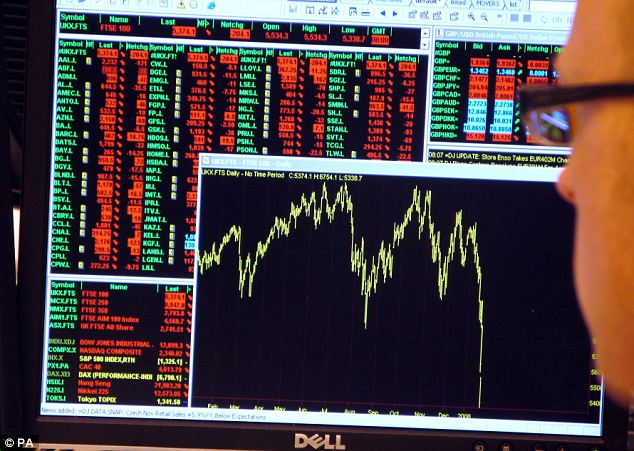 Footsie firm: The UK blue chip index edged higher in lunchtime trade on hopes for further gains by US stocks.

‘The FTSE 100 continues to lag behind its peers, making heavy going of every gain even as its equals in Germany and the US seem content to glide higher,’ she said.

Kelly noted that German April unemployment figures showed the largest rise in five years, instead of dropping as expected.

Germany saw a 24,000 increase in the number of unemployed in May. Analysts were expecting a further drop of 15,000 following the 25,000 decline the month before. However, the jobless rate remained unchanged at 6.7 per cent, as expected.

‘Every weak piece of German news puts much more pressure on the ECB than equivalent figures from the eurozone’s  periphery,’ she said.

US stock futures were still pointing to a positive start today from Wall Street, but Kelly said ‘a day bereft of macro data means we are unlikely to see much progress, even if (yesterday’s) durable goods orders are still having an impact.’

In London, drugs giant GlaxoSmithKline was the biggest blue chip faller, shedding 27.0p to 1,607.5p after it emerged that its commercial practices were facing a formal criminal probe by the Serious Fraud Office (SFO).

Glaxo said it was cooperating fully with the SFO probe and was committed to operating its business ‘to the highest ethical standards’.

Analysts at Societe Generale said Glaxo’s share performance could be restrained in the near-term, especially if there are more negative headlines or if the US were to launch investigations.

But on the upside, Royal Bank of Scotland rose 5.1p to 344.2p in the wake of a report that the taxpayer-owned firm is preparing to shed up to 400 jobs in its US trading businesses over the next 18 months as it slims down operations in the face of tough new regulations in America.

Lloyds Banking Group was also higher, up 0.4p to 77.5p extending gains made yesterday when it announced its intention to float its TSB division.

Among other financials, bourses operator London Stock Exchange gained 46.0p to 1,952.0p as broker Credit Suisse added the group to its ‘Focus List’ and reiterated its outperform rating as it expects a re-rating of the stock if the possible acquisition of Russell Investments is completed.

The biggest gainer on Footsie was temporary power group Aggreko, which added 86.0p at 1,751.0p after recently confirming it will supply the energy to support broadcasting the FIFA World Cup this summer from Brazil.

10.05: The Footsie was essentially flat as the morning session progressed as the benefit of overnight gains by US and Asian stocks was suppressed by falls in GlaxoSmithKline after it emerged that the drugs giant’s commercial practices were under a formal UK criminal investigation.

By mid-morning, the FTSE 100 index was 0.9 points higher at 6,845.8, consolidating after closing over 29 points higher yesterday, with ex-dividend factors clipping just over a point off the index as Marks and Spencer and Whitbread traded without entitlement to their latest payout.

William Nicholls, dealer at Capital Spreads said: ‘The bears are lacking the headline breaking alarm bells to trigger a sell-off, and until that time markets will most likely drift higher as volatility (and therefore risk) decreases.’ 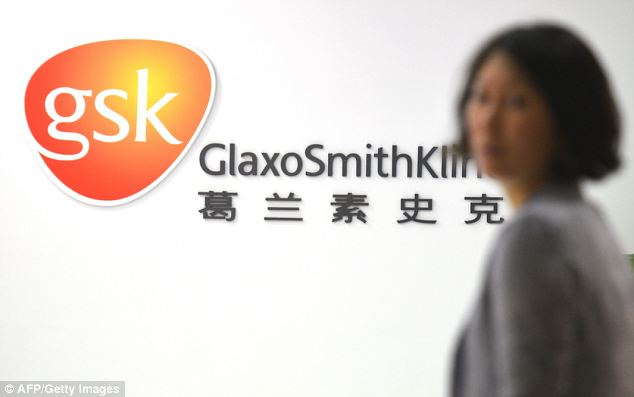 Glaxo headed the blue chip fallers list, down more than 1 per cent, or 23p, to 1,611.5p after it disclosed last night that it was being probed by the UK’s Serious Fraud Office (SFO).

Glaxo has been at the centre of a major investigation in China into claims that as much as £324million was funnelled through travel agencies and consultancies to doctors and health officials to boost sales and raise prices.

Last month, Chinese police named a senior executive it accused of bribery. Other allegations have centred on Glaxo’s practices in Iraq and Poland.

Glaxo said it was cooperating fully with the SFO probe and was committed to operating its business ‘to the highest ethical standards’.

Blue chip engineering firm Weir Group was also down after it disclosed that Finland’s Metso had rebuffed its second takeover approach, and that it now no longer intended to pursue a deal. Weir shares fell 35p to 2,569p.

Royal Mail was under pressure as well, losing 5.5p to 525.0p as broker Cantor Fitzgerald trimmed its target price for the postal delivery firm to 480p from 500p and repeated its sell rating following last week’s maiden full year results from the privatised group.

08.30: The FTSE 100 has opened down 6.2 points at 6,838.7 as traders mull a positive batch of US economic data and the prospect of further policy easing by the European Central Bank.

US markets soared overnight after data showed that manufacturing orders rose unexpectedly in April, home prices advanced more than forecast in March and consumer confidence climbed close to its highest level since 2008.

Meanwhile, there are growing hopes the European Central Bank will unveil new policy moves at its June 5 meeting to combat the theat of deflation. 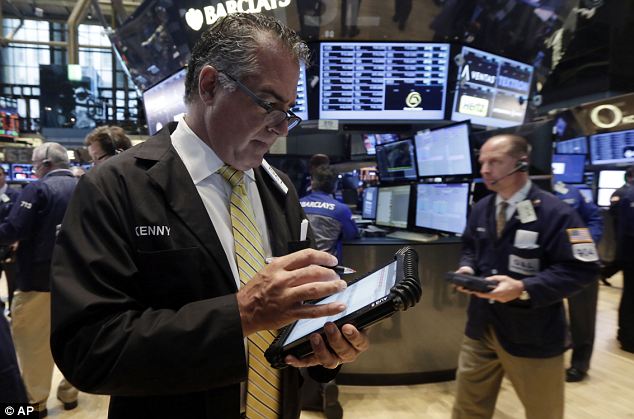 Market watch: Wall Street soared after a strong batch of US economic data

President Mario Draghi said it was aware of the risks from prices remaining too low for too long and
it was equipped to get inflation back to its target again.

The FTSE 100 closed up 29.19 points at 6,844.94 yesterday, lifted by gains in chip designer ARM and InterContinental Hotels Group, which pushed the market back to within reach of its record high.

London’s top index has hovered tantalisingly close to its all-time high of 6,930 in recent months.

Michael Hewson of CMC Markets said: ‘Given current sentiment it is increasingly difficult to imagine what the catalyst would be to prompt any sort of sharp downward move in equity markets given how markets continue to go from strength to strength on a day to day basis, with their ability to cast aside any form of negative narrative.

‘Yesterday we saw the German DAX and the S&P500 post new record highs once again.’

He added: ‘It would appear that European investors are banking on some form of substantive action from the ECB next week to avert deflation concerns, but the danger remains that the bank could well be inhibited by its mandate, as well as German political considerations which mean the potential for disappointment remains all too real.’

GLAXOSMITHKLINE: The Serious Fraud Office has launched a formal criminal investigation into GlaxoSmithKline, posing a new challenge to the drugmaker which already faces claims of bribery in China and four other countries.

WEIR: The engineering company said it submitted a revised acquisition proposal for Finnish rival Metso on May 20, but the approach had been rejected a week later. It added that it would not pursue a takeover any further at the current time.

ROYAL BANK OF SCOTLAND: Royal Bank of Scotland has become the latest overseas bank to shrink its business in the US after announcing it would cut its mortgage trading business by two thirds, the Financial Times reported.

WM MORRISON: Faced with falling profits, grocer WM Morrison is asking suppliers to cover the cost of ensuring products meet regulations in the latest of a series of payment demands, the Guardian reported.

RIO TINTO: The global miner plans to cut about 300 jobs from its troubled project in Mongolia, the Times reported.

SERCO, FIRST GROUP: Serco has been selected to run the new Caledonian Sleeper rail franchise, which has estimated revenue of £800million over 15 years. First Group , the previous operator of the franchise, said its medium-term targets were unchanged.

DE LA RUE: The banknote printer reported a 43 per cent rise in operating profit in a financial year that saw a profit warning and the departure of its chief executive Tim Cobbold.