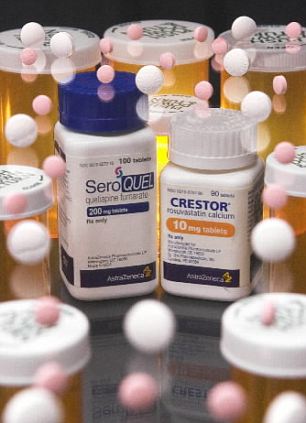 Bid talk: US rival Pfizer is rumoured to have approached AstraZeneca with a £60billion takeover offer

Shares in the drugmaker jumped 8 per cent or 295.5p to 4,077p after media reports that US rival Pfizer has proposed a £60billion takeover. Read more here.

GlaxoSmithKline was also among the top gainers, up 59.5p at 1,618.5p, on news of an asset swap with Swiss pharmaceuticals firm Novartis.

Novartis said it had agreed to acquire GSK’s oncology products for a $ 14.5billion payment, and it would also divest its vaccines business – excluding flu – to GSK for $ 7.1billion plus royalties.

Jonathan Sudaria of Capital Spreads said: ‘European equities are set to grind higher tracking a positive session overnight in the US.

‘Although gains are expected, expect markets to be a bit groggy following the long weekend and whilst traders catch up on geopolitical events. The Ukraine crisis is a nightmare to decipher what’s going on and its subsequent affect on risk.

‘The last big headline was the surprise agreement between the West and Russia at the Geneva talks to de-escalate the situation, but any perceived optimism has been scuttled by the clear detachment from events on the ground.’

BARCLAYS: The bank is planning to withdraw from large parts of the metals, agricultural and energy markets as part of a restructuring of its investment bank, a person familiar with the matter said.

COLT: The telecoms and technology group announced a restructuring.

DRAGON OIL: The company said its average oil production had risen during the first quarter.

POLYMETAL: The Russian precious metals miner said its revenues fell 2 per cent to $ 336million in the first quarter of 2014, year-on-year.