By This Is Money Reporter

12:00: Investors kept faith with Debenhams today despite a slide in profits, as its management set out plans for reviving the department store chain.

Shares were 4 per cent higher after chief executive Michael Sharp pledged to refine its promotional strategy and improve its multi-channel offering through much faster delivery times.

The wider market is flat as the optimism from the previous session on better-than-expected US retail sales figures was offset by more uncertainty over the health of the Chinese economy. 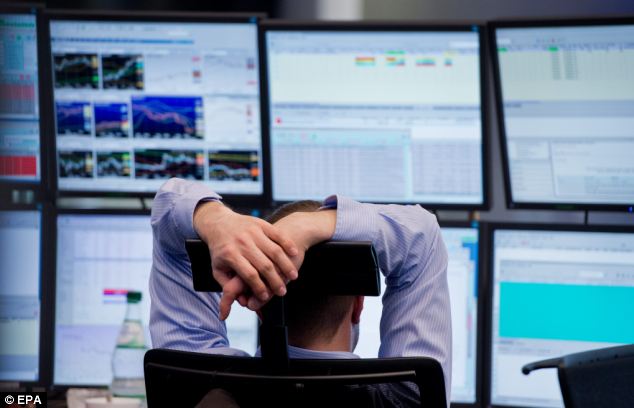 Sterling has been little affected by official figures showing inflation fell to 1.6 per cent in March, the sixth monthly decline in succession – as widely expected. It has held firm at $ 1.67 and €1.21.

The profits plunge had already been pencilled in after the group issued a stark warning on earnings following a disappointing Christmas trading period, while analysts said sales in January and February were better than expected.

Matthew McEachran at N+1 Singer said the trading update showed ‘small strategic modifications’ which were first steps towards weaning customers off the discounts that have hit its profit margins.

Brewer SABMiller has been one of the biggest top flight fallers after it said currency headwinds will impact full-year results.

Volumes grew by 2 per cent over the year but this was not enough to prevent shares from falling 2 per cent or 50.5p to 3073.5p, with the drop reversing some of the gains seen in the stock in recent weeks.

G4S stock is also down, in the wake of a ratings downgrade for the outsourcing and security giant from Deutsche Bank. Shares have fallen 6.5p to 241.5p.

Generator supplier Aggreko, which will provide power at this summer’s World Cup in Brazil, is near the top of the FTSE 100 risers’ board after it said underlying revenues rose by 5 per cent in the three months to March 31. Shares have lifted 31.5p to 1541.5p.

Meanwhile Imperial Tobacco is up as it announced it was to end cigarette manufacturing in the UK, under plans to close its Nottingham factory with the loss of up to 540 jobs. Shares rose 25p to 2499p.

Elsewhere, JD Sports Fashion was down despite posting a 27 per cent hike in underlying profits to £77million and reporting ‘significant improvement’ at its outdoor brands Blacks and Millets. Shares have fallen 6p to 1608p.

09:00: Debenhams has received the backing of investors today as it set out its plans for reviving the department store chain in the wake of a slide in profits.

The FTSE 100 Index has slipped 6.4 points to 6577.3 as better-than-expected US retail sales figures were offset by uncertainty over the health of China’s economy.

Brewer SABMiller is one of the biggest top flight fallers after it said currency headwinds will impact full-year results. Volumes grew by 2 per cent  over the year but this has not been enough to prevent shares from falling 3 per cent or 81.5p to 3042.5p, reversing some of the gains seen in the stock in recent weeks.

Generator supplier Aggreko, which will provide power at this summer’s World Cup in Brazil, is top of the FTSE 100 risers board after it said underlying revenues rose by 5 per cent in the three months to March 31.Shares are 48.5p higher to 1558.5p.

Markets are expected to be relatively quiet two days ahead of the late Easter holiday despite the release of a number of corporate and economic reports.

Among them is the latest British retail sales report which showed High Street shops suffered their biggest annual fall last month, hurt by unfavourable year-on-year comparisons due to the late timing of the Easter break.

In Europe, market traders are showing apprehension ahead of upcoming economic and corporate data, while worries persist about the crisis in Ukraine.

Rio Tinto: The global miner’s iron ore shipments fell 8 per cent in the first quarter from the previous quarter due to weather-related disruptions in Australia and Canada, but the company said it was on track to meet its full-year target.

Aggreko: The world’s biggest temporary power provider said it was likely to meet expectations for 2014 after posting a five per cent rise in group revenue in the first quarter of the year.

SABMiller: The brewer posted a 3 per cent rise in full-year revenue today, helped by sales volume increases in both beer and soft drinks, and said it was reviewing its holding in African hotel company Tsogo Sun Holdings.

Diageo: The global drinks firm announced the launch of a tender offer to acquire up to 26 per cent more in India’s United Spirits Ltd in a deal valued at about $ 1.9billion.

GKN: The engineer reported a 22 per cent jump in quarterly profit, helped by growth in demand for commercial aircraft and light vehicles, as it warned that later on in the year growth would be modest due to tougher comparatives.

Royal Dutch Shell: The oil major is restarting an unspecified unit at its 100,000-barrel-per-day Scotford refinery near Edmonton, Alberta, it said in a message posted on a community information phone line.

Barclays: The bank, which is under fire from shareholders for raising bonuses despite a fall in profit, will appoint Crawford Gillies to its board today, Sky News reported, citing sources. He will take over chairmanship of the remuneration committee from John Sunderland later this year.

Capita: The company will acquire software firm Amtsybex Group for £82million on a cash-free, debt-free basis.

Debenhams: Britain’s second largest department store group said it was confident improvements it was making to its business would deliver some cheer for investors, as it posted a 24.5 per cent fall in first-half profit.