15.00: The Foosie maintained a modest rally in midafternoon trade as US stocks put in a positive opening performance today, but gains were eroded as traders squared their positions ahead of the weekend.

In early deals on Wall Street, the Dow Jones Industrial index added 91.8 points at 16,424.5, extending yesterday’s rally which came after some upbeat US economic data balanced the comments on Wednesday from Fed boss Janet Yellen that interest rates could rise sooner than expected. 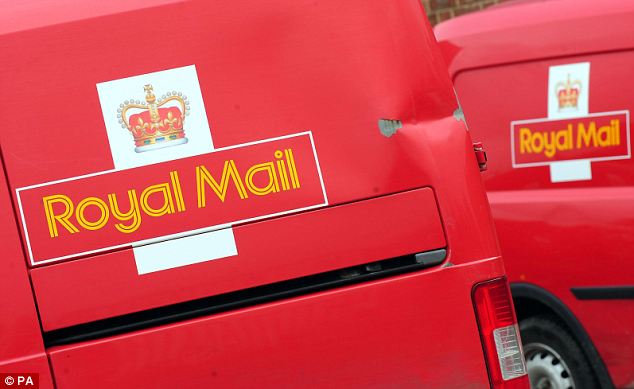 Jasper Lawler, market analyst, CMC Markets said: ‘Investors appear to have taken Yellen’s surprise comments as a good chance to buy the dip in the equities uptrend. The excuse used yesterday was the positive readings from the Philly Fed and the Conference board surveys.’

In London, Resolution – one of the insurers badly hit on Wednesday by the changes to annuities announced in the 2014 Budget – revived slightly today thanks to some positive broker comment.

The company – which this week also said its restructuring was complete, its founders were leaving and it would be renamed Friends Life – edged up 0.1p at 318.2p.

Analysts at Barclay’s raised their target price for Resolution to 370p from 361p, having cut it from 378p in an initial reaction to the budget changes.

The move came after the analysts had a meeting with Resolution’s chief executive Andy Briggs yesterday, who they found to be relatively upbeat about the insurer’s ability to deal with the biggest change the pensions industry has ever faced.

‘The chief executive had clearly thought through how the changes would affect the opportunity Resolution has in the retirement market,’ the Barclays’ analysts said in a note.

‘The end product might change, the strategy does not. We believe the share price reaction, down 10 per cent from Tuesday’s close and 17 per cent from its high earlier this month, is overdone and that at a 6.7 per cent yield the stock is attractive at these levels,’ they added maintaining an overweight rating on Resolution shares.

Another blue chip gainer was Royal Mail Group, up 3.3p to 578.3p after positive comment from HSBC, with the bank starting coverage of the postal firm with an overweight rating and 710p price target.

‘We see the strong cash flow generation as the key attraction of the Royal Mail and added to this potential upside from property disposals. Aside from the emergence of end-to-end competition, the key downside risk is higher-than-expected mail declines, as in the short term the cost base is sticky,’ analysts’ at HSBC said in a note.

But negative broker comment weighed on supermarket firm J Sainsbury, with its shares falling 1.1p to after 305.8p after Goldman Sachs chopped its target price back to 155p from 280p in a negative sector review.

‘The UK grocery industry is highly leveraged when one considers both financial and off-balance sheet leverage. Sainsbury is the most levered, and as such we believe that the risks from declining margins in the UK grocery sector to equity valuations are more pronounced for it than for Tesco or Morrisons,’ the Goldman Sachs analysts said in a note.

13.00: London shares entered calmer waters today after a choppy few days buffeted by fears over the impact of the Ukraine crisis as well as the future of US monetary policy.

Gains by the miners helped buoy the Footsie at lunchtime, although falls by taxpayer owned lender Royal Bank of Scotland on a broker downgrade and news of a legal judgement put a dampener on the banking sector limiting the rally.

Around midsession, the FTSE 100 index was up 12.3 points at 6,554.8, having shed 0.5 per cent on Thursday after Federal Reserve chief Janet Yellen suggested US interest rates could rise sooner than markets thought. 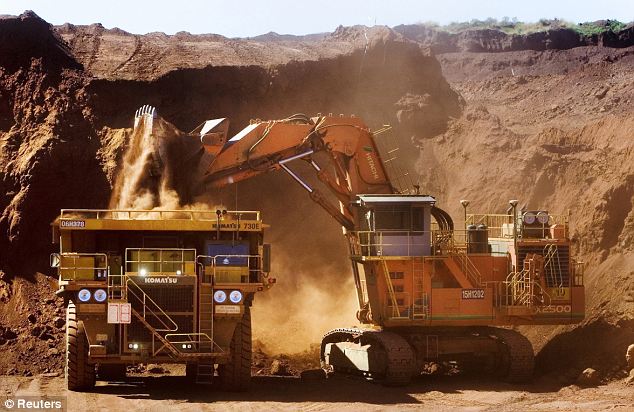 ‘Ongoing geopolitical tensions in the Ukraine together with Fed chair Yellen’s remarks regarding monetary tightening keep us anxious in general but as we head to the end of the week, traders are demonstrating a level of comfort,’ he said.

RBS shares were not comfortable, however, shedding over 2 per cent with a 6.4p fall to 298.9p after Barclays Capital cut its rating on the bank to equal weight from overweight.

‘We believe that near-term pressure on tangible book value and a slow build in returns will weigh on share price performance and we downgrade our rating to equal weight with a reduced price target of 300p and see risks skewed to the downside,’ analysts at Barclays said in a note.

The broker said it preferred Lloyds Banking Group for exposure to a UK recovery, but the firm – also still partly owned by the UK taxpayer – tracked a weaker sector, down 0.5p to 78.3p.

Traders said RBS shares were also unsettled after a court yesterday ruled that a businessmen could pursue the bank for alleged mis-selling of interest rate hedges.

Among other blue chip fallers, negative broker comment weighed on luxury goods firm Burberry, down 33.0p to 1,387.0p after Bank of America Merrill Lynch cut its rating to neutral from outperform, and HSBC reduced its target price for the stock.

Changes in the Budget giving retirees the freedom to draw down as much or as little of their pension pot as they want, removing the need to buy an annuity, continued to weigh on the life and pensions firms today.

Legal & General, which fell sharply in the wake of Wednesday’s announcement but steadied the next day, was down again, leading the FTSE 100 fallers’ board with a slide of nearly 3 per cent, or 5.5p, to 207.6p.

However, small firm Partnership Assurance, which provides enhanced annuities for people with lower life expectancies due to health and lifestyle issues, lost half its value in the wake of the Budget, dropping further on Thursday, but bounced back a little in the latest session, adding 3.8p, to 127.8p.

Strength in mining stocks provided the main prop under the blue chips today, with the sector supported by optimism that further stimulus measures could be taken by top metals consumer China to help its economy.

The miners also benefited from some upbeat data yesterday from the United State after a leading regional indicator of US economic health rose in February by the largest amount in three months. Jobless benefits figures were also near pre-recession levels, pointing to a more stable job market.

Aircraft parts supplier Meggitt also notched up good gains among the blue chips, ahead 4.4p at 473.9p as broker UBS upped its rating to buy from neutral, arguing that Meggitt’s recent share price fall – down by roughly 10 per cent since the start of 2014 – has been overdone.

’We believe that Meggitt can sustain around 6 percent long term profit growth, driven mainly by the commercial aftermarket – largely planes that have already been sold – and the high growth energy sector, where Meggitt’s proprietary technology  gives them a performance advantage,’ UBS analysts said in a note.

The US data helped offset worries that the Federal Reserve will hike interest rates early next year and offset underlying worries over the situation in Ukraine and growth in China.

Tracking gains overnight on Wall Street and in Asia, the FTSE 100 index was up 14.4 points at 6,556.8, having fallen on Thursday after new Federal Reserve chief Janet Yellen suggested rates could rise sooner than markets thought. 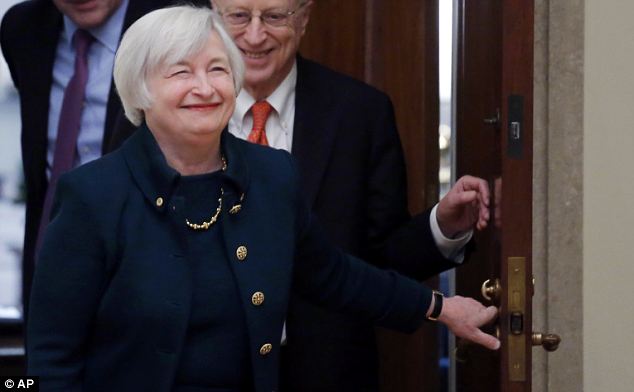 The impetus came from a leading indicator of US economic health, which rose in February by the largest amount in three months. Jobless benefits figures were also near pre-recession levels, pointing to a more stable job market.

Demand-driven mining stocks were encouraged by the positive data for the world’s biggest economy,  as Anglo American improved 31.5p to 1443p and Rio Tinto added 50.7p to 3,207.5p.

The blue-chip fallers board included Royal Bank of Scotland, which shed 2.7p to 302.85p after the part-nationalised bank was downgraded by brokers at Barclays.  Lloyds Banking Group was off 0.5p at 78.2p.

Shares in bookmakers remained under pressure after the Budget increased the tax on fixed odds betting terminals from 20 per cent to 25 per cent.

08.25: The Footsie edged higher in opening deals today, steadying after falls yesterday with caution over the situation in Ukraine and lingering concerns over growth in China keeping investors hugging the sidelines.

The FTSE 100 index started 12.8 points firmer at 6,555.3 but traders pointed out that with the latest quarterly ‘triple-witching’ of futures and options expiries for individual stocks and the index taking place around 10.15 am today the mood could turn volatile later.

The blue chip closed down 30.69 points yesterday, with the decline leaving it just 2 per cent above an early February low, and down 3.1 per cent this year. 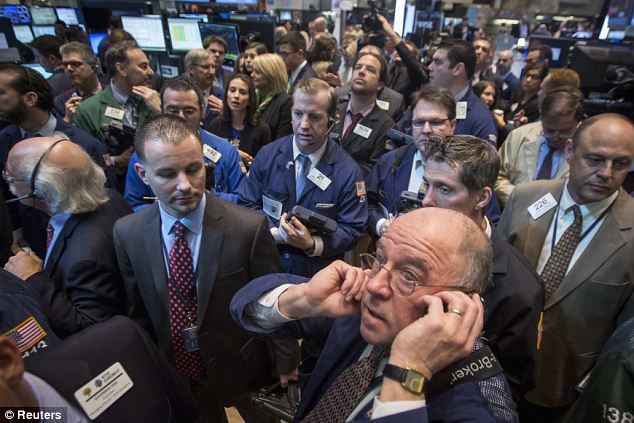 Jonathan Sudaria, dealer, at Capital Spreads said: ‘Markets remain well off this year’s highs at the moment as headwinds in China continue to pick up pace and the geopolitical powder keg in the Ukraine doesn’t look to be toned down any time soon.

‘For now though, traders will be hoping nothing rocks the boat too much today so they can at least end the week on a positive note.

Michael Hewson, chief market analyst at CMC Markets UK said: ‘Concerns remain about what is going on in China which is being reflected in the decline of the copper price, as well as the yuan with both continuing to come under pressure as markets fret about a series of minor loan defaults, from a variety of smallish Chinese companies.

‘The wider concern revolves around the property and real estate market with some concern that further defaults could trigger a “ripple out effect” as nervous investors pull funds from vulnerable sectors.

The only economic data of note today will be the release of the latest UK public finances for February at 9.30 am. Having seen disappointing receipts in January of only 6.4billion the deficit is expected to return to the tune of 7.9billion.

In the US, after Wednesday’s post-FOMC meeting comments from new Federal Reserve Janet Yellen signalling the possibility of interest rate hikes sooner than the market had expected caused a little consternation a series of speeches by Fed policymakers later today could well add some extra colour to her remarks, and the opportunity to soften the tone somewhat.

Dallas Fed President Richard Fisher is due to speak in London later this evening, followed soon after in Washington by Minneapolis Fed President Naryan Kocherlakota as well as Jeremy Stein, also both voting members of the FOMC.

BP – The oil giant has been sucked into the row over Russia’s annexation of Crimea with calls for the delisting from the London Stock Exchange of Rosneft, the Moscow-based oil company in which the British group has a 20 per cent holding, according to the Guardian.

BG GROUP -The oil and gas producer is cutting nearly 300 jobs in Britain and making significant cuts in Australia, weeks after warning that turmoil in Egypt would hit output this year and in 2015, the Times newspaper reported.

ROYAL BANK OF SCOTLAND : A family have won a landmark case giving them the green light to sue RBS for millions over the alleged mis-selling of interest rate  swaps that ultimately left them with crippling borrowing costs on a 55 million pound loan, the Independent reported.