15.45: The Footsie remained weak in late afternoon trade, weighed down by cautious trading updates from blue chip firms Pearson and easyJet, and falls by miners after disappointing manufacturing data from China, the world’s biggest consumer of metals. 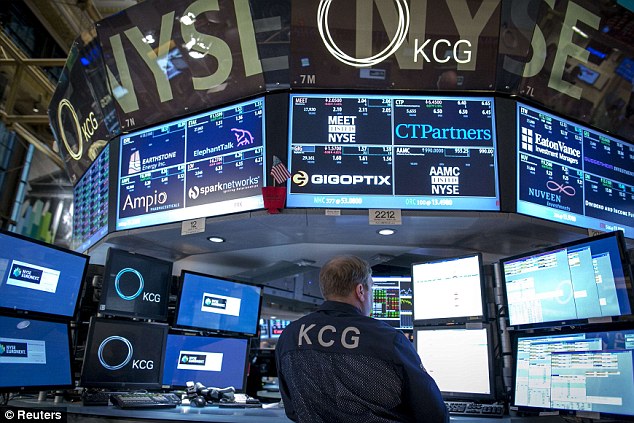 US weak: Big early falls in New York after further disappointing earnings news added to the pressure on the Footsie

In London, Financial Times publisher Pearson was the biggest blue chip faller, down 117p to 1,194.0p after it warned that full-year profits will be hit by higher restructuring costs and weaker-than-expected trading at its North American education arm.

Broker Investec downgraded its rating for Pearson back to hold from add, reversing a more positive move made last year.

‘We are disappointed by further sequential downgrades for both FY13E and FY14E, which reinforces the message that structural and timing headwinds continue. The latter should reverse with UK/US curriculum changes/common core transition, but timing is unclear, with both sales and (especially) margin under pressure. We assume things remain uncertain for now, with limited visibility either way for a heavily 2H weighted stock,’ Investec analysts’ said in a note.

Among other FTSE 100 fallers, outsourcing group Capita lost 22.0p at 1,037.0p after an opposition Labour MP warned that there had been a ‘complete failure’ from the government contractor over its handling of personal independence payments (PIP).

Aviva fell 5.7p to 470.7p after news its finance director Pat Regan is to leave for a new job in Australia after four years in the role at the insurance giant. Regan is to take on a similar position at Sydney-based insurer QBE in June. He was appointed to the Aviva job in February 2010.

The FTSE 100 listed group said formal arrangements for the search for a replacement were in progress and that it was committed to finding a “first class” candidate.

But among the gainers, Chemring added 3.7p at 243.7p after the mid cap firm which makes heavy munitions and bomb detectors said it was now a more resilient business as a result of a restructuring that has seen it offload non-core operations and target non-NATO markets, where defence spending is expected to rise.

The Fareham-based company said tough conditions in the US and the impact of restructuring and write-downs resulted in a loss of 56.6million in the year to October 31.

And Irn-Bru firm AG Barr gained 7.0p at 616.5p after it said it traded ahead of the wider soft drinks market after sales rose by 5.5 per cent in the quarter to January 27.

However the group said planned increases in levels of investment in marketing and promotion have capped further margin progress over the period.

12.50: London shares extended their falls at lunchtime, knocked by profit warnings from both Pearson and easyJet today and by expectations for a weak start on Wall Street on further disappointing US corporate earnings, notably from weapons maker Lockheed Martin.

The FTSE 100 index was down 13.6 points at 6.812.7 as the profit warnings cast a cloud over the wider market in the run up to the usual flood of annual results from UK companies due in the coming weeks. 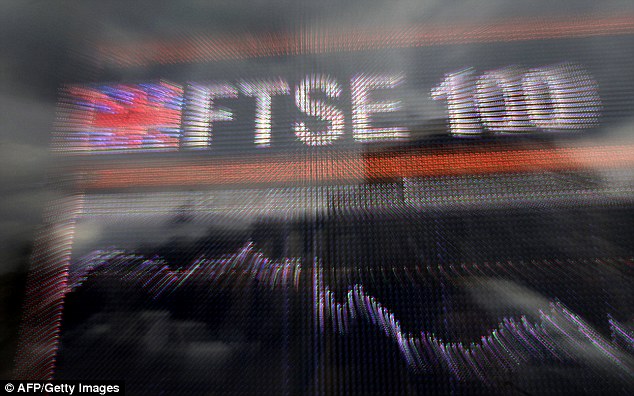 Financial Times publisher Pearson slumped by more than 9 per cent, down 119p to 1,192.0p after it warned that full-year profits will be hit by higher restructuring costs and weaker-than-expected trading in its North American education arm.

Low-cost airline easyJet forecast a higher than expected seasonal first half loss of between 70million and 90million, compared with 61million a year ago, due to the timing of the traditional busy Easter holiday.

The airline has been a favourite of investors in the last year but its shares shed 48.5p to 1,694.5p, despite an improvement in revenue per seat growth in the last quarter.

Some relief was found in the banking sector as two of the stocks to fall in the wake of Monday’s profits warning from Germany’s Deutsche Bank recovered ground. Barclays rose 4.4p to 282.6p and Royal Bank of Scotland added 4.4p to 352.3p.

‘Underinvested, unloved, a recent underperformer. This is the history. Launching e-commerce, maturing systems investment, a best-in-class supply chain. We forecast profits rise 40 per cent in 3 years,’ said analysts at Exane BNP Paribas in a note.

‘The UK recovery strengthens. Loose monetary policy, credit stimulus, falling inflation and fiscal support drive positive sector LFL (like for like sales) across both 2014 and 2015. Forecast risk lies on the upside,’ the broker said.

Howard Archer, chief economist at HIS Global said: ‘While overall sales in January were hindered by winter clothing sales being limited by the mild weather, the January CBI survey does support the view that many consumers are being cautious in their expenditure and are keen to contain their spending after they have splashed out for any reason.

‘This is clearly a consequence of the extended squeeze on consumers’ purchasing power that has come from inflation running above earnings growth for an extended period.’

10.10: The Footsie stayed weak as the morning session progressed, with a tentative rally quickly snuffed out as heavyweight miners fell back after disappointing data from top metals consumer China.

Some dull trading updates from Financial Times publisher Pearson and discount airline easyJet also unsettled the market, fueling investor concern about the strength of earnings in 2013 at a time when analysts say profit growth is key to driving any further gains in equity markets as central banks start to remove economic stimulus measures. 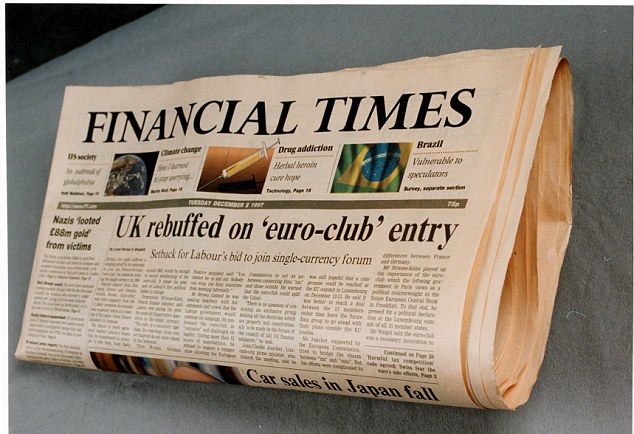 Pearson punished: Shares in the Financial Times publisher dropped after it said trading last year was weaker than expected

Pearson was the top blue chip faller, down 95.0p to 1,203p after the Financial Times owner said trading last year was weaker than expected.

The company, which is a leading publisher of school textbooks and curriculum material, said pressure on its key markets in North America was largely to blame for the profits shortfall.

‘Pearson is now at risk of a big ‘double whammy’ – earnings downgrades and a de-rating from its premium (valuation) level, driven by market concerns,’ analysts at Liberum said in a note.

Easyjet was also among the top FTSE 100 fallers, 25.0p lower at 1,718.0p after the budget airline guided that first half seasonal losses would be higher this year than last year due to the timing of Easter which falls in its fiscal second half. However the airline said it was pleased with an improvement in revenue per seat growth in the last quarter.

Activity in China’s factory sector contracted in January for the first time in six months, according to the Markit/HSBC PMI, pointing to a weak start in 2014.

Anita Paluch, trader at Varengold Bank said: ‘HSBC PMI for Chinese manufacturing sector paints a darker picture as the index sides into contraction territory, which is more or less expected when you shift your policy towards domestic consumption to make economy more sustainable in the longer run.

‘And yet, while this is preliminary reading, and could still be revised on 30.01, is definitely no good news for anyone who is concerns the slow down happens to quickly.’

On the upside, though, there were some signs of strength in Europe, with the equivalent PMI surveys showing growth slowing less than expected in France and activity picking up in Germany. That is good news for British blue-chips, which make around a quarter of their sales in Continental Europe.

Among the blue chip gainers, Marks & Spencer made a rare appearance at the top of the risers board after Exane BNP Paribas lifted its rating on the stock to outperform, helping the shares add 15.1p to 496.3p.

Royal Bank of Scotland was also higher, up 4.8p to 352.8p, rallying after falls yesterday in reaction to a downgrade in rating by UBS.

Multi-utility SSE was also in demand, ahead 5.0p at 1,322p after the company said it was on course to boost profits by nearly 9 per cent to 1.54 billion this year and increase its dividend payout to shareholders by 3 per cent.

08.30: The FTSE 100 has opened down 7.6 points at 6,818.7, mirroring losses in Asia after softer-than-expected Chinese manufacturing data fuelled concerns over the pace of growth in the world’s second-biggest economy.

Activity in China’s factory sector contracted in January for the first time in six months, a Markit/HSBC survey showed.

It pointed to a weak start for the economy in 2014, at a time when Chinese policymakers are seeking to curb high debt levels to head off financial risks. 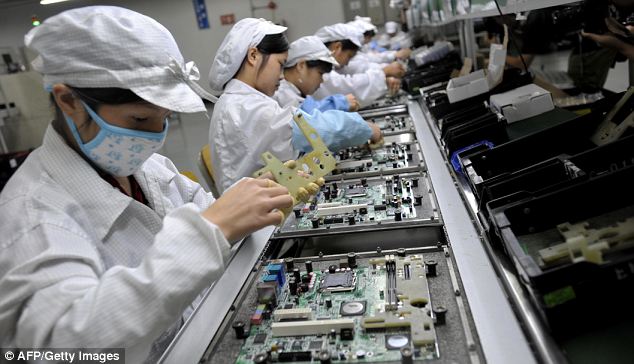 In Europe, investors are awaiting services and manufacturing data for France, Germany and the eurozone, which should shed light on the pace of recovery in the region.

Bank of England policymakers are discussing what they will do when unemployment falls to their 7 per cent threshold level for considering an increase in interest rates, said monetary policy committee member Ian McCafferty.

British car production reached its highest level since 2007 last year, buoyed by strong domestic demand and exports outside the European Union, according to the Society of Motor Manufacturers and Traders.

Michael Hewson of CMC Markets said: ‘For the past few days European markets have struggled for direction with any gains being somewhat short lived, as ultimately a lack of momentum has prompted a slide back into the close, on the back of lacklustre company earnings announcements.

‘This lack of direction seems likely to be repeated given what is on the economic calendar today, with the release of contrasting economic data from Europe’s biggest economic regions, though there is a chance of it being slightly more positive.’

PEARSON: The publisher said earnings per share after restructuring charges would be lower in 2013, due to weak demand in its education businesses in North America and Britain.

SSE: The utility has pledged to cap energy prices until 2015.

EASYJET: The budget airline said that first-half seasonal losses would be higher this year than last year due to the timing of Easter, which falls in its fiscal second half. It reported a 7.7 percent rise in quarterly revenues.

LONDON STOCK EXCHANGE: The LSE said income in the third quarter rose 48 per cent, with all business divisions seeing revenue growth in the period.

AVIVA: The insurer said its chief financial officer Pat Regan would step down in June to join Australian insurer QBE as CFO.

LONMIN: South Africa’s hardline Association of Mineworkers and Construction Union began a strike over pay in the platinum sector, bringing mines that produce half the world’s platinum to a standstill.

UNILEVER: The consumer goods group is considering whether to sell its Slim-Fast business, Sky News reported. It follows months of speculation sparked by a similar move by rival Nestle.

RBS: The author of a report into state-backed Royal Bank of Scotland’s lending to small businesses said he found no evidence of the bank engineering companies into default.

RBS is also among the banks being investigated by EU antitrust regulators for suspected rigging of interest rates linked to the Swiss franc, a person familiar with the matter said.