Futures trading points to a higher open on the US Dow Jones shortly, while in London the FTSE 100 has added to earlier gains to trade 18.6 points higher at 6,736.5.

‘The New Year lull could be about to end today,’ said Alex Conroy of Spreadex.

‘After riding upward momentum of the particularly strong end to 2013 investors seem to have been cashing out after until they have a greater feel for what 2014 will bring.’

He added that many investors were waiting for a speech by outgoing US Fed chairman Ben Bernanke later today. 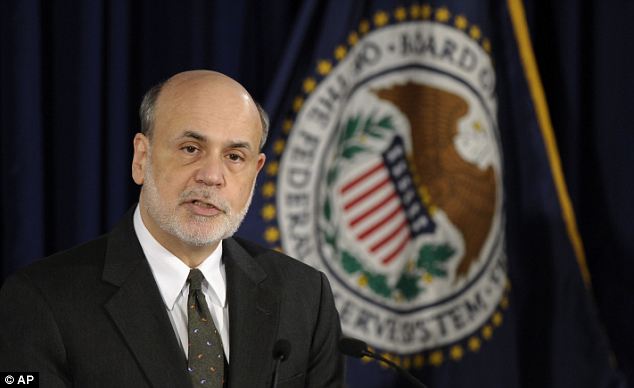 Stimulus drive: Outgoing Fed boss Ben Bernanke is due to give a speech later that will be closely watched for clues to future central bank policy

‘This speech is likely to trigger volatility in the markets as investors gain a better understanding of the state of the economy which could see investors piling back into equities.’

Kathleen Brooks of Forex.com said: ‘In one of his last speeches as Fed Governor, Ben Bernanke takes to the stage at 19.30 this evening [London time], when he will be speaking at an economics conference in Philadelphia.

‘He is joined by other members including [Charles] Plosser and [Jeremy] Stein who appear on a panel discussion earlier in the day; however Bernanke is likely to grab all of the media attention.

‘This conference is not an obvious forum for policy revelations and we think it will be a mere amuse-bouche before next week’s all important Fed minutes.

‘But it is worth listening to any comments from Charles Plosser. He is a new voting member at the Fed and is also a known hawk. Due to this the market could be more interested than usual in what he has to say.’

Broadly speaking, so-called ‘hawks’ worry more about the impact of the Fed’s stimulus policies on inflation, while ‘doves’ are more concerned about combating unemployment.

The US Fed’s stimulus drive was intended to support the economic recovery, but the plentiful cheap money created has also helped to spark a global stock rally in recent years.

Fashion chain Next saw its shares surge to new all-time highs, making it the biggest blue chip riser, up 467.5p to 5997.5p, after its buoyant Christmas update.

M&S followed it on the risers’ board with a 16.4p gain to 443.7p as investors were more hopeful over its trading update next week after the flurry of stellar sales updates. 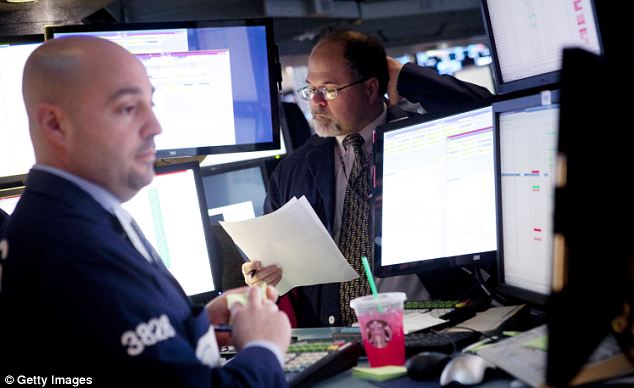 Market watch: Traders will be keeping a close eye on speeches by key players at the Federal Reserve scheduled for tonight

It had been hit hard earlier in the week after rival Debenhams issued a major profits warning following disappointing Christmas sales.

Debenhams also continued to claw back some of Tuesday’s heavy falls, up 3 per cent or 2.5p to 77.6p.

Housebuilders were likewise making advances after Nationwide data revealed prices surged by 8.4 per cent over 2013, with property values rising by 1.4 per cent month-on-month in December.

However, markets have generally suffered a lacklustre start to 2014, with a fall yesterday on the FTSE 100 marking the first time since 2008 that new year trading had kicked off in the red.

The Dow Jones on Wall Street also closed lower, down 0.8 per cent overnight, having reached record highs at the end of 2013.

Miners remained on the fallers board after survey data yesterday pointed to slowing factory activity in China.

‘January is going to be another good month for the markets, we’ve just had a bit of a rocky start,’ he said.

Fashion chain Next stepped up the rally in the retail sector today as it hiked its profits forecast after ‘significantly’ better-than-expected Christmas trading. Read more here.

Next was the biggest riser on the FTSE 100, up 520p to 6050p, after its buoyant update ensured it joined John Lewis and House of Fraser on the list of Christmas retail winners so far.

Sales across Next stores leapt 7.7 per cent higher between November 1 and Christmas Eve, while revenues surged by 21 per cent in the Next Directory catalogue and online division.

It also cheered investors by announcing a 75million special dividend payout worth 50p a share and plans to return a further 300million to shareholders over the year ahead.

Alastair McCaig, market analyst at IG, said: ‘We wish a happy birthday to the FTSE 100, which is 30 years old today! A little piece of birthday cake could go a long way to help lift the mood after yesterday’s gloomy start to 2014. Could this be the year we break the 7000 level?’

But he added: ‘The City still has a rather lethargic feel at the moment, and volumes continue to be somewhat on the low side.’

The question of how fast the US Federal Reserve will reduce or ‘taper’ its vast stimulus programme is much on the minds of market traders, as it has helped drive the massive stock rally of the past few years.

McCaig said: ‘Today offers the first chance for the markets to gauge the Federal Reserve’s mood in 2014. A plethora of Federal Open Market Committee members are speaking at different events tonight, including both Charles Plosser and Jeremy C Stein along with Fed chairman Ben Bernanke.

‘European nervousness on the first trading day of the year looks to have transferred itself across the Atlantic, as US markets gave up a chunk of their December gains yesterday. But with trading floors on Wall Street far from full, it is a touch premature to judge the market’s mood for 2014 just yet.’

9.00: The FTSE 100 is trading down 2 points at 6,715.9, with retailers in focus as investors assess the winners and losers of the festive shopping season.

Next shares rose 8 per cent after the firm raised its annual profit forecast following fourth quarter sales that came in significantly ahead of its expectations. 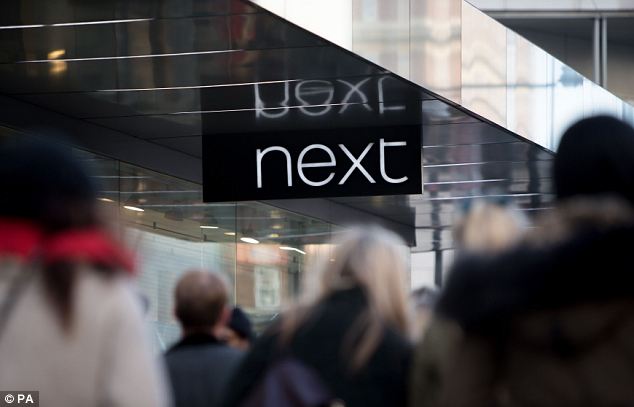 Strong sales: Next enjoys a robust festive season and announces a special dividend of 50p a share

The company also said it would pay a special dividend of 50 pence a share and outlined a plan for more payouts rather than share buybacks. The stock was up 450p at 5,980p.

The Footsie closed down 31.18 points at 6,717.91 yesterday, as miners were hit by disappointing Chinese factory data.

Today, there was further evidence that the world’s second-largest economy lost steam into the close of 2013. Growth in China’s services sector fell to a four-month low in December as business expectations dropped, a government survey showed.

Ishaq Siddiqi of ETX Capital said: ‘Market participants kicked off 2014 by taking some cash off the table after major global indices registered record gains last year – S&P500 up around 30 per cent for 2013, the highest annual gain since 1997.

‘In Asia overnight, China’s PMI [purchasing managers’ index] services December report fell short of expectations, dropping to the weakest point since August 2013 – this is consistent with the loss of momentum seen in the manufacturing sector.

‘Although both PMI manufacturing and services remain above the expansion zone, markets are worried that a loss of momentum in the Chinese economy could leave the emerging markets area feeling more vulnerable as the Federal Reserve in the US kicks off tapering [stimulus cuts].’

BP: US-listed Kosmos Energy announced it has entered into a rig share agreement with BP and AP Moller Maersk for drilling operations in Morocco.

ASTRAZENECA: Probiodrug is to sell its CDK9 inhibitor programme, developed to regulate inflammation, to AstraZeneca for an undisclosed sum.

APR ENERGY: The energy firm says it has renewed a 70 megawatt contract to supply diesel power in Botswana to its national electric utility.

JOHNSON SERVICE GROUP: The textile rental and drycleaning firm has appointed Chris Sander as its new chief executive with immediate effect, and said it expected to announce full year profit before tax in line with expectations.